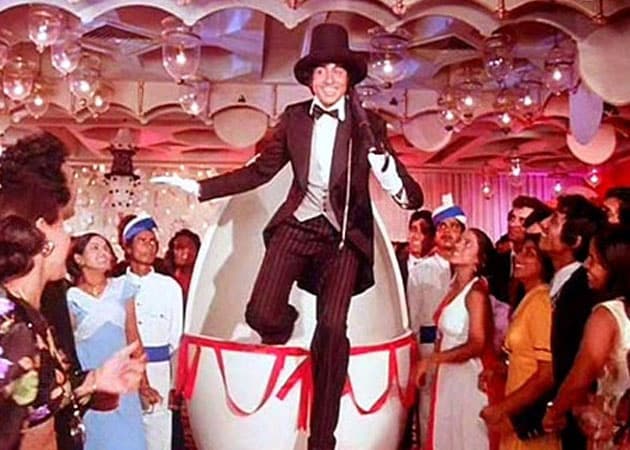 In 1977, Manmohan Desai's Amar Akbar Anthony, preaching religious tolerance, was a landmark film in mainstream Bollywood. Not only did it become a blockbuster hit, it also left an imprint on pop culture with its songs, its one-liners and the character of Anthony Gonsalves. The film was among the biggest hits in the careers of all its stars - Amitabh Bachchan, Vinod Khanna, Rishi Kapoor, Parveen Babi, Neetu Singh, Shabana Azmi, Pran, Nirupa Roy, Jeevan and Ranjeet. Even minor characters like the bodyguard Zabisco acquired a cult status of their own.
Did you know:
In a goof-up that was never corrected, Rishi Kapoor's character Akbar Illahabadi calls Neetu Singh's character Dr Salma by her real name instead of her screen name in their first scene together, with him being given a health check by her.
Anthony Gonsalves' best known dialogue is borrowed from British politician Benjamin Disraeli's 1878 speech. As he climbs out of the giant Easter egg, Anthony exclaims,"sophisticated rhetorician intoxicated with the exuberance of your own verbosity." Disraeli, who was referring to political rival W. E Gladstone, used the word "inebriated" instead of "intoxicated."
The famous mirror-band aid scene was shot in the absence of director Manmohan Desai. While Amitabh Bachchan was rehearsing the scene, Mr Desai was shooting the climax of Parvarish in another part of the studio. He returned to find the scene shot.
The real Anthony Gonsalves was a well-known music arranger who counted R D Burman and Pyarelal (one half of Laxmikant-Pyarelal who composed the music of Amar Akbar Anthony) as his pupils. Mr Gonsalves died in January 2012.
In 1983 film Andha Kanoon - starring Rajinikanth, Amitabh Bachchan and Hema Malini - the three villains are named Amar, Akbar and Anthony. They were played, respectively, by Prem Chopra, Danny Denzongpa and Pran.
Director Manmohan Desai cast Amitabh Bachchan in every film he made after Amar Akbar Anthony - Suhaag, Naseeb, Desh Premee, Coolie, Mard, Ganga Jamuna Saraswati and Toofan which he didn't direct but produced. The typically street-style costume that Rishi Kapoor wore, including a net shirt, was sourced from Mumbai's Linking Road.
The song Humko Tumse Ho Gaya Hai is unique for bringing together four of the biggest singing stars of the time - Lata Mangeshkar, Kishore Kumar, Mohd Rafi and Mukesh. They never sang together before or after.
Nirupa Roy played Amitabh Bachchan's mother is six films other than Amar Akbar Anthony - Deewar, Muqaddar Ka Sikandar, Suhaag, Besharam, Mard and Lal Baadshah.
Amar Akbar Anthony was remade in Telugu as Ram Robert Rahim and in Malayalam, starring Mammootty, as John Jaffer Janardhanan.