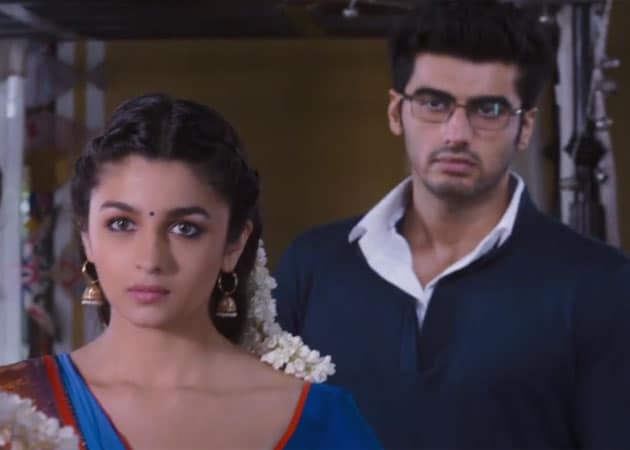 When actress Alia Bhatt announced on February 26 she was getting 'engaged' on Twitter, the trailer of 2 States became the one we most wanted to see.

When actress Alia Bhatt announced on February 26 she was getting 'engaged' on Twitter, the trailer of 2 States became the one we most wanted to see. Just released, the trailer stars Alia and her rumoured real-life boyfriend Arjun Kapoor as lovers from two ends of India.
The north-south divide is a subject that has been explored multiple times in our movies, be it the emotional Ek Duje Ke Liye or the quirky Chennai Express. This version of cross-culture love is based on author Chetan Bhagat's novel 2 States: The Story Of My Marriage.
The trailer shows Tamil Ananya and Punjabi Krish - the characters played by Alia Bhatt and Arjun Kapoor - at various stages in their relationship. We begin at the breakup and then time-travel through their story from "falling in love" to "meeting the parents". We also see a glimpse of their parents - played by Amrita Singh, Ronit Roy and Revathi - and the changing dynamics between them from exchanging pleasantries to trading insults.
The beautifully shot scenes and colourful costumes help freshen the appeal of a film which has a very predictable (it's based on a bestseller!) premise.
2 States has two producing titans behind it - Sajid Nadiadwala and Karan Johar - and releases on April 18.