20 Years Later, DDLJ's Raj and Simran are Still the Same 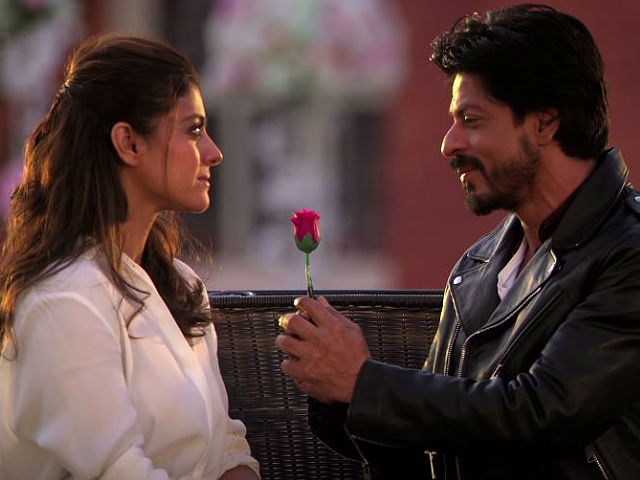 Kajol and Shah Rukh Khan in a still from the video.

Shah Rukh and Kajol are currently filming Rohit Shetty's Dilwale and the team paid a special tribute to mark this day with a video wherein Raj and Simran effortlessly recreate the same magic which they had on October 20, 1995

20 years back they created history. 20 years later-they are all set to do that again.
Bollywood's favourite onscreen jodi - Shah Rukh Khan and Kajol's epic film Dilwale Dulhania Le Jayenge completed 20 years today. And the world has been celebrating ever since.
Shah Rukh and Kajol are currently filming Rohit Shetty's Dilwale and the team paid a special tribute to mark the day with a video wherein DDLJ's Raj and Simran effortlessly recreate the same magic, which they had on October 20, 1995.
Shah Rukh meanwhile, cannot stop smiling:

Been watching video & smiling nonstop https://t.co/NR0uhuvv4L. But now to work & shoot a lovely scene with Kajol for the new Dilwale. Fun

In the video, Shah Rukh and Kajol's conversation is reminiscent of their terrific chemistry which they shared in 1995. Their innocent exchange of dialogues will leave you overwhelmed even today.
Also Shah Rukh and Kajol 'answer' the age-old question as to why no one really stopped the train when Simran's father (played by Amrish Puri) said: "Jaa Simran, Jee Le Apni Zindagi."

In one part of the video, Raj and Simran almost became Rahul and Anjali from Kuch Kuch Hota Hai, wherein Kajol refrains from talking to Shah Rukh and says: "I don't want to talk to you." But, Shah Rukh brings it back to DDLJ with the Palat dialogue. It will make your heart melt. Once again.(Also Read: 20 Years After Dilwale Dulhania Le Jayenge, 20 Top Moments From the Film)

Allow DDLJ's Raj and Simran to sweep you off your feet yet again:

On Twitter, celebrities are in love with the new-age Raj and Simran:

Goose bumps then and now #20YearsOfDDLJhttps://t.co/YP7Q8NUhNg

Meanwhile, Dilwale reunites Shah Rukh and Kajol after 2010's My Name is Khan. Together they have featured in films like Karan Arjun, Baazigar, Kuch Kuch Hota Hai and Kabhi Khushi Kabhie Gham.
Dilwale also features Varun Dhawan and Kriti Sanon and is scheduled to release on December 18.