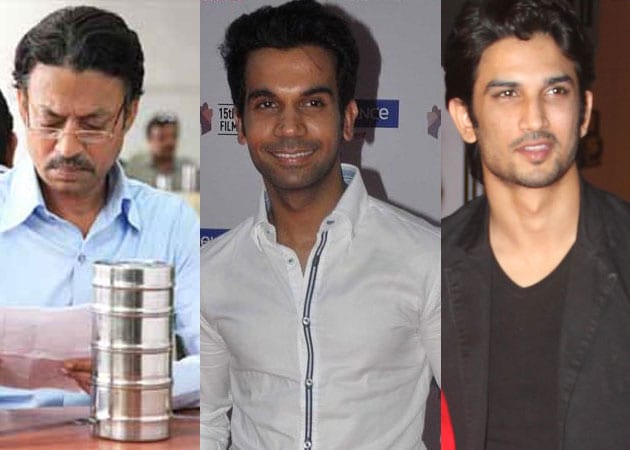 If 2013 was about box office records, it will also be remembered for superlative performances by a host of actors like Irrfan, Rajkummar Rao and Sushant Singh in highly acclaimed films such as The Lunchbox, Shahid and Kai Po Che respectively.

If 2013 was about box office records, it will also be remembered for superlative performances by a host of actors like Irrfan, Rajkummar Rao and Sushant Singh in highly acclaimed films such as The Lunchbox, Shahid and Kai Po Che respectively.
These films might not have been gold diggers at the box office, but they struck the right chord with the audiences for the power-packed performances by the talented, who were noticed amidst the glitter of big stars.
IANS lists best actors on the basis of their acting skills and not box office records:
Irrfan: Known for his stellar performances in the past, Irrfan once again proved his mettle as a widower in the atypical love story The Lunchbox and spy thriller D Day. He was appreciated by the critics and viewers alike.
Nawazuddin Siddiqui: Gone are the days when a well-built body and rugged looks used to be the tennets of a good hero. Far from being a conventional looking hero, Nawaz became a sought after name post his performance in short film Star, which was a part of Bombay Talkies, Shorts and The Lunchbox. And next year he is set to satiate his fans' appetite with Miss Lovely and Kick.
Farhan Akhtar: Biopics are a gamble when it comes to playing the protagonist as they have a risk of not matching up to the real life legends, but Farhan Akhtar's risk paid rich dividends. The actor left no stone unturned to get under the skin of national athlete Milkha Singh in Bhaag Milkha Bhaag. Not only the he succeeded in immortalising 'Flying Sikh' on the screen, the film was a box office winner too. In the New Year, he is gearing up to woo his fans with fun-filled drama Shaadi Ke Side Effects.
John Abraham: While John Abraham's funfiled role in I Me Aur Main was rejected by the audience, his serious avatar in action thriller Race 2, real-life based crime saga Shootout At Wadala and gritty drama Madras Cafe fetched him rave reviews and won him accolades. This time he won brownie points for his acting and not for his sculpted body and good looks. Although he has films like Dostana 2 and Welcome Back lined up for release in 2014, but his fans would certainly expect him to take up meatier roles.
Rajkummar Rao: Though Rajkummar made his debut with critically acclaimed Love Sex Aur Dhoka three years back, it is only this year that he come into prominence. The actor featured in two different roles in Kai Po Che and Shahid. If he wowed as a man torn between his friendship and traditional values in Abhishek Kapoor's directorial venture, Hansal Mehta's Shahid biopic saw him playing slain human activist and advocate Shahid Azmi with the hilt. In short, he pulled off both the roles with perfection.
Sushant Singh Rajput: Many say that the transition from television to the big screen is not easy, but Sushant Singh Rajput is an exception to this. Not only did he excelled in playing a carefree yet sensitive character in Kai Po Che, but managed to win hearts with his chocolate boy attitude in Maneesh Sharma's Shuddh Desi Romance.
Amit Sadh: After being in the industry for couple of years, another TV actor Amit Sadh got his big break with Kai Po Che and he made the most of it. The actor played well the role of a someone trying to balance the wishes of his friends and the responsibilities towards his family. The performance also helped fetch him his next film Running Shaadi.com.
Emraan Hashmi: His Ghanchakkar with Vidya Balan may have been turned down by the audience, but Emraan Hashmi's performance in Ekta Kapoor's Ek Thi Daayan did manage to stir people's reactions. The film received mixed responses at the box office, but his acting was one of the elements that dragged people to the cinemas. His transformation from a non believer of supernatural power in the film to one who defeats them at the end was admirable.
Ranveer Singh: This year he managed to break his casanova image with his versatility in Lootera and Ram-Leela. If period drama Lootera saw Ranveer as a tragic lover, his passionate act in Ram-Leela left people in awe. His chemistry with Deepika Padukone set the screen ablaze.