DDLJ has given us some of the most hilarious and romantic moments on film and, as DDLJ celebrates its birthday, here are our top 21 moments 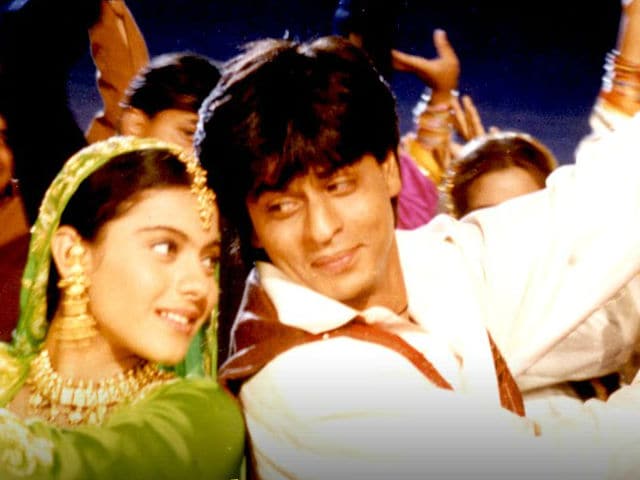 Two decades ago, a dilwala named Raj romanced a young woman named Simran in Switzerland and the mustard fields of Punjab, where she eventually became his dulhania. 21 years after Dilwale Dulhania Le Jayenge released on October 20, 1995, Shah Rukh Khan and Kajol's film is still the definitive love story for Bollywood fans.
DDLJ, as it is fondly known, has given us some of the most hilarious and romantic moments on film and, as DDLJ celebrates its birthday, here are our top 21 moments:
1. Raj Steals Beer

Now, if Raj hadn't stolen the beer, he may have had an easier time winning over Simran's dad - but then, would there have been a film at all?
2. Raj Fails in London

If you are going to fail your exams, do it in style. After all, as his 'Pop' (played by Anupam Kher) says, Raj made his ancestors (who had only failed in India) proud by failing in videsh.
3. The Train

Eurostar, you're famous. The 'Raj And Simran Train Moment', as we'd like to call it, became everyone's most desired way of meeting their true love. The train moments are also the most spoofed and reenacted scenes in Bollywood. In fact, Shah Rukh Khan himself spoofed the train sequence in Rohit Shetty's Chennai Express.
4. Raj Flirts With Simran

Helping her catch her train doesn't guarantee you a place in her heart, discovers Raj as he labours through the most cliched lines which are pointedly ignored by Simran as she reads her book, upside down.
5. Oopsie, Raj Drops Simran

The SRK-Kajol romance is the stuff of Bollywood screen legend, made all the more memorable by bittersweet moments like when he drops her in the song Ruk Ja O Dil Diwane. Trivia: While they were shooting for the song, Kajol actually had no idea that Shah Rukh would drop her. She was as shocked by Shah Rukh's rudeness as we were when we first saw it.
6. The Water-Squirting Flower

Gentlemanly Raj apologises to Simran for his rudeness with a flower. She forgives him, only to discover it's another trick.
7. Raj and Simran Miss Their Train

Still touring together, Raj and Simran miss the train. And who is to blame? Raj! In one of the most hilarious moments from the film, Kajol dissolves into tears as she realizes she's stuck with the co-traveller from hell. We don't blame her, after all that Raj has put her through.
8. Raj Saves Simran From Arrest

Talking matters into her own hand, Simran decides to hitch a lift only to fall into trouble again - this time, however, with no help form Raj. On the contrary, Raj comes to her rescue just as the French policeman is all set to arrest her. Shah Rukh's side-splitting way with words in the scene left us in stitches.
9. Simran Gets Drunk

Simran now sees Raj in a new light - and we get to see her in one too. This is what happens when a 'good girl' gets drunk. She breaks down the shop displays, runs about the city giving Raj a hard time. "Rabba Mere Mujhe Bachaa" indeed.
10. The Sanskaari Moment

While waiting for their bus, Raj and Simran visit a church. Raj thinks it's fun to yell and hear his voice echo but is silenced by a withering look from Simran.
12. Palat

The second most iconic scene - after the train scene - in DIlwale Dulhania Le Jayenge is when Simran turns to look at Raj as she walks away. "Agar woh tujhse pyaar karti hai, toh woh paltegi. Palat.. Palat.. Palat.. " - and she does. As Simran turns to give Raj one last wide smile, her smile mirrors ours.' Time and again, lovers have sworn by the Palat test.
13. Raj and Simran Meet in Punjab

When you've been prised away from your one true love in one continent and are reunited with him in another, you need a romantic setting and soundtrack. DDLJ did it in 100% Bollywood fashion with the mustard fields of Punjab providing the scenery and Raj's guitar picking out the chords to Tujhe Dekha Toh Ye Jaana Sanam..
14. The Jungle Scene

Now that he's in India to win his love, Raj is a man of action. The first task is to gain entry into a house which is preparing for Simran's wedding to the testosterone-fuelled Kuljeet. A little bit of ingenuity later, Raj and Kuljeet - who he's just saved from a gory fate in a jungle (not really)- are the best of friends and Raj is a step closer to his love.
15. When Raj Meets Simran in the House

Kuljeet introduces his jigri yaar from London to Simran. Simran's expression of surprise mingled with her attempt to disguise her elation is only matched by Shah Rukh's poker face as he says, "Namaste Simranji"
16. The Bird Scene

Little did Raj know that stealing a crate of beer in London would prove an almost-insurmountable obstacle in his romantic life. As he attempts to win over the Father of the Bride, Raj decides to skip subtle in favour of style. As Amrish Puri feeds pigeons and intones Aao in his deep baritone, Raj pops up declaiming Phurrrr.
17. Amrish Puri Serenades Farida Jalal With Aye Meri Zohra Jabeen

He is strict and a man of few words but Chaudhary Baldev Singh (Amrish Puri) loves his wife and isn't shy about wearing his heart on his sleeve once in a while. As one of Bollywood's most popular wedding songs (Mehendi Laga Ke Rakhna) ends with the arrival of Amrish Puri and Raj's sheepish comical walk with the dupatta, the smiles that were wiped away return as the disciplinarian sings Aye Meri Zohra Jabeen to his missus, played by Farida Jalal. 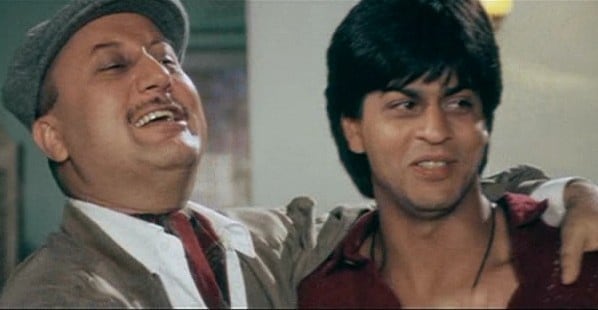 What happens when Raj's 'Pops' (Anupam Kher) decides to help him? He ends up betrothed to Kuljeet's sister Preeti. Pops meets Preeti and assumes she's Simran despite Raj's desperate attempts to tell his father that he's ruining everything.
19. Karva Chauth

Simran fasts for Karva Chauth and tricks Raj - and the family - into helping her break her fast rather than Kuljeet.
20. When the Truth is Out:
By this point of the movie, viewers know that Chaudhry Baldev Singh (Amrish Puri) is a no nonsense man. So imagine what happens when he realizes that Raj is there for Simran. Yes, you got that right - a karara thappad, ouch!

Damn, that echoed.
It was followed by a spectacular speech from Raj which voiced the angst of many lovers who have to choose between their own happiness and that of their parents.
21. The Train Again
As Indian Railways bears Raj away from Simran forever, her stern father relents and, in a moment of epiphany, realises that no other man can love his daughter as much as Raj does. Ja Simran, jeele apni zindagi he says, letting go of her hand. Once again, Simran runs to catch her train and is helped on to it by Raj.
The End - and it couldn't have been happier.