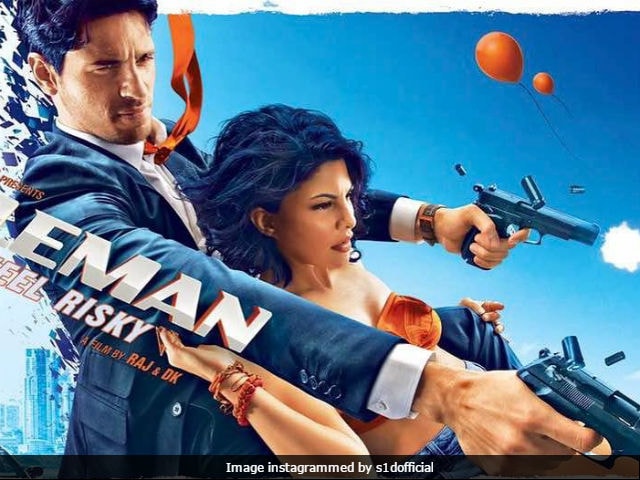 Actor Sidharth Malhotra unveiled the second poster of his forthcoming film A Gentleman, co-starring Jacqueline Fernandez today. In the poster, the 32-year-old actor is seen protecting Jacqueline from the bad guys. Hours after leaving his fans intrigued with the teaser of the movie, Sidharth Malhotra unveiled the first poster of the film late Monday night. The poster shows the Ek Villain actor holding a gun in one hand and a lid of a pressure cooker in the other. The tagline of the poster reads: 'Sundar, Susheel and Risky.' Check out the first two posters of Sidharth Malhotra and Jacqueline Fernandez's upcoming film A Gentleman here:


@jacquelinef143 you remember shooting this one? #AGentleman second poster! Watch out for Jackie taking on the bad guys people !

Pressure cooker se leke Bandook - he can use both. First look of #AGentleman guys. @jacquelinef143 here I'm, as promised!

See the teaser of A Gentleman here:


Get ready to meet the Sundar, Susheel, Risky me. Catch a glimpse of #AGentleman! @jacquelinef143 @foxstarhindi directed by Raj n DK

A Gentleman has been directed by Raj Nidimoru and Krishna D K, who earlier helmed films like Shor In The City, Go Goa Gone and Happy Ending. The film also features Suniel Shetty and Darshan Kumar in pivotal roles.
The shoot of A Gentleman was completed in February. Earlier, the film was titled Reloaded and was reported to be a sequel to 2014 movie Bang Bang!, starring Hrithik Roshan and Katrina Kaif. However, Sidharth and Jacqueline dismissed the reports through this post:

A Gentleman, which has been extensively shot in Thailand, USA and India, is scheduled to release in theatres on August 25.
Sidharth Malhotra and Jacqueline Fernandez have earlier co-starred in 2015 movie Brothers, directed by Karan Malhotra.
Sidharth Malhotra was last seen in 2016 movie Baar Baar Dekho. After A Gentleman, the Kapoor and Sons actor will feature in Neeraj Pandey's Aiyaary. He will also be seen in Abhay Chopra's Ittefaq.
Jacqueline Fernandez last featured in Chandran Rutnam's According to Mathew. She is currently shooting for David Dhawan's Judwaa 2, co-starring Varun Dhawan and Taapsee Pannu.