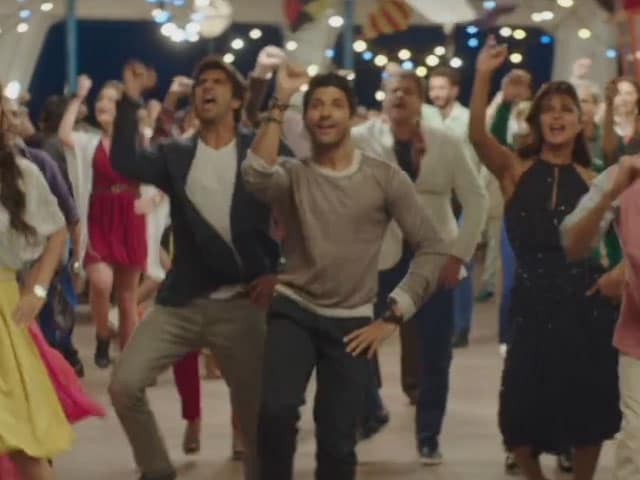 A still from the song Gallan Goodiyaan

Director Zoya Akhtar's upcoming film Dil Dhadakne Do revolves around the Mehras, a dysfunctional Punjabi family on a cruise trip, and new song Gallan Goodiyaan shows how the oddballs like to party.
What appears to be a karaoke tag game of sorts is started by Kabir Mehra, played by actor Ranveer Singh, breaking loose on the dance floor. His sister Ayesha, played by actress Priyanka Chopra, adds Punjabi tadka as she grooves to the beats with him. They are soon joined by their parents, played by Anil Kapoor and Shefali Shah.
Anil Kapoor may play the suave Kamal Mehra in Dil Dhadakne Do but his dance moves in the song bring to mind Lakhan from the 1989 film Ram Lakhan. Ranveer and co-star Farhan Akhtar join him in his signature step from the song My Name Is Lakhan. Needless to say, Mr Kapoor does it best.
The song was welcomed with much ado on social media and #GallanGoodiyaan began trending soon on Twitter.
Farhan sings parts of Gallan Goodiyaan. Other singers include Yashita Sharma, Manish Kumar Tipu, Shankar Mahadevan and Sukhwinder Singh.
Priyanka, who goes by her screen name Ayesha Mehra on Twitter, tweeted that Gallan Goodiyaan is her favourite song from Dil Dhadakne Do.


Turn up the volume for this one... #GallanGoodiyaan - My favourite song! http://t.co/W3F2H4LEdC

Director Zoya Akhtar's lyricist father Javed Akhtar was all praise about the film on Twitter. He tweeted:


Saw Zoya ' s Dil Dharekne Do. Great movie . Feeling so proud of her that it can be diagnosed as a border line case of arrogance .

While the title track from the film, which released last week, had a retro feel to it, the new song shows the Mehras at their flamboyant best.
Dil Dhadakne Do is set to release on June 5.
Watch: