Aamir Khan gets US honour for tackling social issues 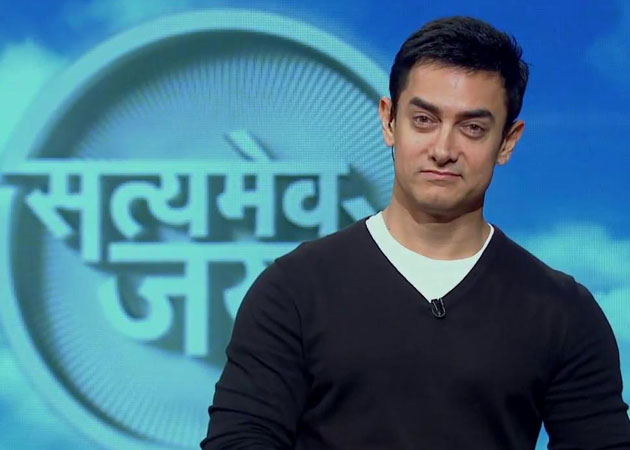 Aamir Khan has been honoured with a prestigious US award in recognition of his successful effort to create debate on India's pressing social problems through his popular TV show Satyamev Jayate.

Bollywood superstar Aamir Khan has been honoured with a prestigious US award in recognition of his successful effort to create debate on India's pressing social problems through his popular TV show Satyamev Jayate.
Khan, 47, was presented with the Inaugural America Abroad Media Award along with Oscar-winning director Kathryn Bigelow and the International Centre on Non-violent Conflict (ICNC) at a function here on Monday (October 28, 2013) night.
Launched in 2012, the Sunday morning show Satyamev Jayate, tackled some of India's most pressing social problems - forced abortions of unborn girls; domestic violence; child sexual abuse; alcoholism and treatment of the elderly.
"I have no idea how the work that we started back home would interest somehow outside India," said Aamir Khan accepting the award in person making a rare exception to his practice of not attending award shows.
"Me and my team are trying to do this show with love, because we feel that we are part of the problem and we are also part of the solution. And we need to find that. We need to question ourselves and look inside as opposed to pointing outside," he said after the ceremony.
Aamir Khan, who was accompanied by his filmmaker wife Kiran Rao, said he is working on the next season of the show, which became so popular at home that it propelled him on to the cover of Time magazine's 100 Most Influential People In the World issue this year.
"All my capabilities lie in the field of media and storytelling. So we try to combine our expertise and capabilities in storytelling and television and picking social issues we feel that can make a difference," he said.
Khan screened the foetal infanticide episode Sunday night at hotel for a small audience whose members audibly gasped as several women told their gruesome stories, according to the Washington Post.
Aamir Khan said, though it is nice to be felicitated here, he is more concerned about Indian audience. "My main aim is to really work in India and to sensitise people about issues and see that we can find solutions to our own issues back home. I am looking to talking to Indians," he said.
In the coming election season, Aamir Khan said he would like to see political parties making social justice and the needs of the common man as part of their agenda.
When asked by a Pakistani journalist whether he would work for a Pakistani film, Aamir Khan answered in the affirmative. "I am a creative person. Whenever I receive an offer from any part of the world, which is of interest to me, I would like to do that."
"The culture of India and Pakistan are the same. Our language is the same. There is a lot of similarities among us. So indeed if there is any offer of a film from Pakistan, and I like the script, I would certainly like to do that," he said.
Bigelow, the other winner, is the director of Hurt Locker, a 2008 American war film about a three-man bomb disposal team during the Iraq War, and Zero Dark Thirty, where she chronicled America's decade-long hunt for Osama bin Laden. She is the only woman to have won an Oscar for Best Director, for Hurt Locker.
Founded by Peter Ackerman, the ICNC produces award-winning documentaries on the role of non-violent resistance in promoting democratic change.