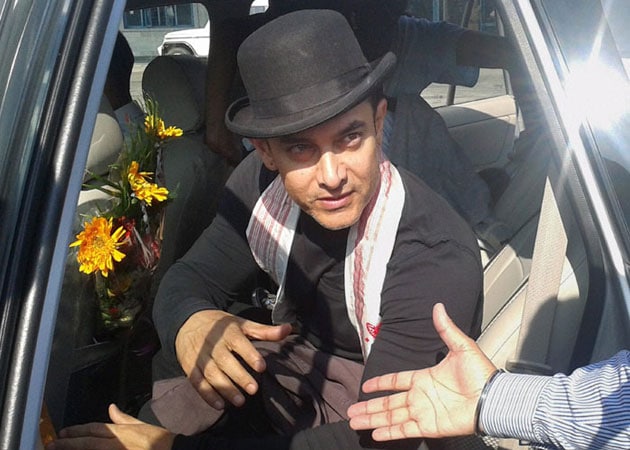 Bollywood superstar Aamir Khan is in Assam with his family and friends to celebrate his wife Kiran Rao's 40th birthday.

Bollywood superstar Aamir Khan is in Assam with his family and friends to celebrate his wife Kiran Rao's 40th birthday.
Aamir, his wife, director-producer Karan Johar, director Ayan Mukherji and music director Salem are staying at a private resort inside Nameri National Park in Sonitpur district.
It's being said that the group has come to celebrate Kiran Rao's birthday today. Aamir was spotted playing with his son Azad in the grounds of the resort today.
Dressed in black pant-coat and bowler hat, his trademark Dhoom 3 attire, Aamir was received with the traditional Assamese Gamosa (scarf) by the Sonitpur district administration officials amidst tight security at the airport here yesterday. His fans had lined up near the airport to get a glimpse of the Bollywood actor.
Stating that Khan wanted to spend quality time with his family and friends, sources in the resort said the actor would be there for a few days and all efforts would be made to ensure their privacy.
The group is scheduled to visit the Kaziranga National Park, sources added.
Speculations were rife that the superstar has come here to shoot an episode of Satyameva Jayate, his television show on social issues.