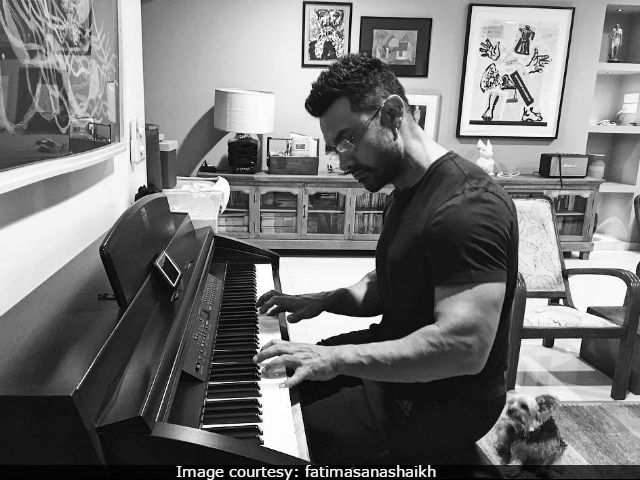 It's been almost a month since Aamir Khan's Dangalreleased and it's definitely been more than a year that Aamir Khan has known and worked with Fatima Sana Shaikh and Sanya Malhotra, the young actresses who played the roles of Geeta and Babita Phogat in the wrestling drama. They haven't disconnected after Dangal, as actors often do. Fatima, for one, seems to be particularly loath to disengage, which is A-okay with us because she just posted a stunning series of black and white images of the 51-year-old actor. Also featured are Dangal co-stars Sanya Malhotra and Sakshi Tanwar. Fatima played wrestler Geeta Phogat in the film, with Sanya taking the role of her sister Babita and Sakshi playing their mother Daya Kaur. Aamir, of course, put in a career-best performance as the abrasive head of the family, wrestler Mahavir Singh Phogat.
Fatima captioned this picture of Aamir Khan playing the piano (we didn't know he could) 'AK'. 'Nuff said.

Meanwhile, Fatima and Sanya's social media feeds are also heavily-loaded with pictures in which they are twinning in their own quirky ways. In an episode of Koffee With Karan, the Dangal sisters confessed that their rapport made their friends think that they are dating each other.

Ahead of the film's release, Fatima shared quirky pictures from the sets of Dangal and we could not take our eyes off them: