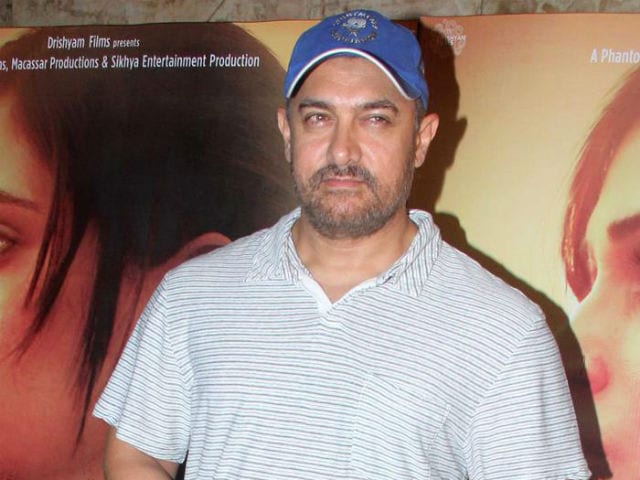 Actor Aamir Khan, who made headlines with his remarks that his wife was thinking of leaving India over 'growing intolerance', on Saturday said India was 'very tolerant' but there were people who spread hatred and who needed to be reined in.(Also Read: Satyamev Jayate Will Focus on Water and Maharashtra, Says Aamir Khan)
"Our country is very tolerant, but there are people who spread ill-will. Those who speak of breaking up this vast country, such people are present in all religions, only Modiji can stop them. After all, Modiji is our PM, we have to tell him," the actor was quoted as having said in an interview to a TV channel.
Asked to respond to his colleague Amitabh Bachchan's alleged remark that he had 'damaged India's brand identity' by his remarks about 'growing intolerance', Aamir said, "I had said in my interview that there was a sense of depression, a sense of despondency, a feeling of insecurity and intolerance was growing. But these are entirely two different things."
He added that he was 'wrongly quoted' and said, "I never said India was intolerant, I was wrongly quoted. To speak about 'rising intolerance' and to say India is 'intolerant' are two different things," the actor said.
Aamir said a sense of security came from the judicial system, which should ensure speedy justice, and from elected representatives who should raise their voice when something goes wrong.
"After all, law is equal for all, and nobody is above law. Unfortunately, there are some people who spread negativity and hatred. If I am not wrong, our Prime Minister has also expressed concern. His slogan is sabka saath, sabka vikas," he said.
The actor also believed that he continued to be country's brand ambassador even though the government may have discontinued his services, saying India is his mother and not a brand.
Aamir also claimed that he would continue serving as India's brand ambassador even after being removed from the post. The actor said, "For me, my motherland is my mother, it cannot be a brand. I can never view my mother as a brand. It could be a brand for other people, but not for me. Till this date, I continue to be India's brand ambassador, even the government may have discontinued me."
He said for 10 years he was brand ambassador for 'Incredible India's Atithi Devo Bhavo campaign' and never charged a penny for all his public service campaigns for the country and nor will he charge in future.
Aamir also asked media and news channels not to air news about violence on TV as it createed an atmosphere of fear. "Every Indian is infected with fear. I would also appeal to media not to highlight such violence, as it creates a sense of insecurity and fear among common people," he said.
About his wife Kiran Rao expressing her intent to leave India due to insecurity, Aamir said he and his wife 'were not going anywhere'. The actor, however, clarified that his wife was a mother and 'a mother always worries about her children.'
"Often we speak so many things among ourselves, but that does not mean, we take 100 per cent action on them. Now was that our intention. Kiran has actually expressed a feeling, an emotion, and we were born here, and we will die here. We are not going to leave our country, let me make it clear," he said.
The superstar went on to say that whenever people try to divide, "we should become alert, and should beware as to why we are being reminded that we are Muslim, Hindu, or Sikh. After all, we are all Indians. We have to be on our quard."
Seeking to clarify that there was intent on his or his director's part on purportedly denigrating Hindu religion in his film PK, he said, "It was only a character playing the role of Shiva in a play, who was made fun of, in a particular situation. After all, Lord Shankar is Almighty, how can we dare to make fun of him?."
The actor said he fully empathised with the cause of Kashmiri Pandits. "My heart cries even today for them. It is shameful, and I appeal to people living in the Valley to bring the Kashmiri Pandits back."