What Aamir Khan, Soon to Play Wrestler in Dangal, Said About Sakshi, Vinesh 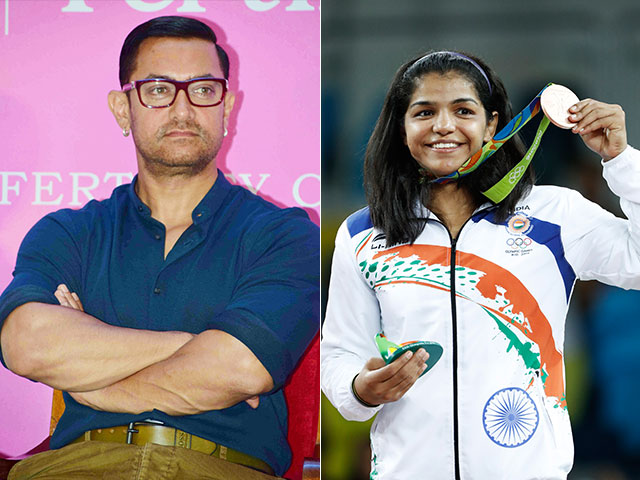 In upcoming film Dangal, Aamir Khan plays Mahavir Phogat, the wrestler from Haryana who trained his daughters Geeta and Babita in the sport.
"I was thrilled. I was watching it live. In fact, two girls who are playing Geeta and Babita in my film were all sitting together and watching it live. It was so exciting to see her win. All her matches were really close. She was trailing in most matches. It was very exciting and thrilling to see her win a medal. She has done us proud," Aamir told NDTV.
He was just one of several Bollywood celebrities to congratulate Sakshi Malik on Twitter.
Sakshi, who is 23, is the first female wrestler from India to win an Olympic medal. She is also one of only four Indian women to do so, joining weightlifter Karnam Malleswari, boxer Mary Kom and badminton star Saina Nehwal.
Sakshi's bronze is the country's only medal at Rio so far. Aamir was watching as she won her round of 16 bout on Wednesday.


Well done Sakshi for winning your qualification round....and all the best Kidambi...you can do it!

Mahavir's niece Vinesh Phogat also competed in the wrestling at Rio on Wednesday, losing her bout after an injury.
To her, Aamir tweeted:

He also had words of consolation for badminton player Kidambi Srikanth, who lost his quarter-final match:
Take a look at @aamir_khan's Tweet:

Meanwhile, Aamir's colleague Salman Khan, who is one the ambassadors appointed by the country's Olympic Association, has announced he will present each Indian athlete at Rio with a cheque for a lakh.
Dangal, co-starring Sakshi Tanwar, releases this Christmas.