Aamir Khan wants to give son Azad a Dhoom: 3 doll 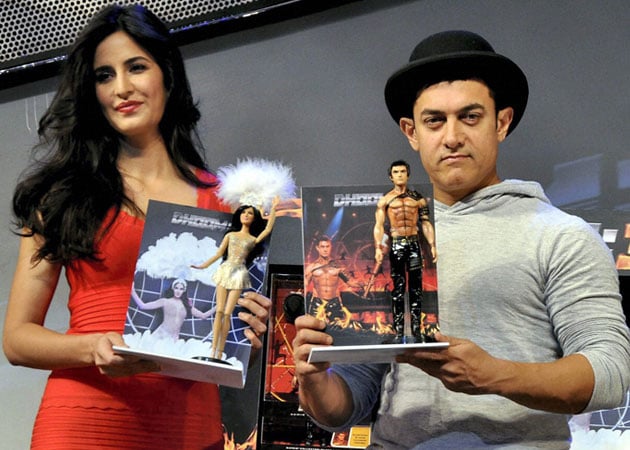 The dolls are based on Aamir and Katrina?s characters in Dhoom: 3.

Bollywood actors Aamir Khan and Katrina Kaif unveiled dolls based on their characters in the upcoming movie Dhoom: 3 on Tuesday, November 20.

Bollywood actors Aamir Khan and Katrina Kaif unveiled dolls based on their characters in the upcoming movie Dhoom: 3 on Tuesday, November 20.
Katrina's Barbie collector doll is based on her character Aaliya, who is an acrobat dancer.
Aamir's collector doll is based on his character Sahir, a performer in contemporary circus and a clever thief.
"I love this idea of dolls. I would like to give one to Azad. I am excited as this is my first ever collector doll based on my movie character. I have worked closely on developing my look in Dhoom: 3," Aamir said.
Katrina too is happy about the look.
After successfully immortalising several Hollywood celebrities and characters from international blockbusters like Twilight and The Hungers Games, American toy manufacturing company Mattel has now forayed into Bollywood with its first Indian film association.
Mattel has associated with Dhoom: 3 to create a limited edition of collector dolls based on Aamir and Katrina's characters.