In 1996, Aamir lost the Filmfare Best Actor award to SRK, who won for playing the male lead in Dilwale Dulhania Le Jayenge. Aamir, who stopped attending award shows since then thinking his performance was better suited for the award, was nominated for starring as Munna in Rangeela 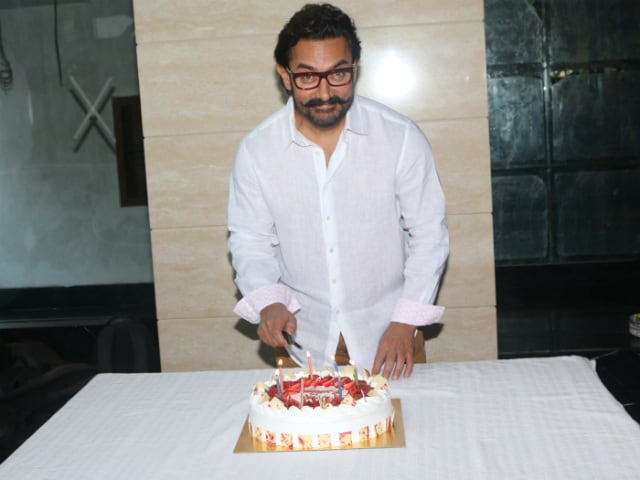 Actor Aamir Khan, who interacted with the media on his 52nd birthday, shared his birthday plans and spoke about his "only" upcoming film, his recent meetings with Shah Rukh Khan and that he is not very fond of award shows in Bollywood. Aamir was asked whether he would attend the National Awards this year, if his much-acclaimed wrestling drama Dangal scores a win. Aamir told reporters on Tuesday, "I don't go to award functions. For me the biggest award is the audiences' reaction and love. I don't want to comment on awards." In 1996, Aamir lost the Filmfare Best Actor award to SRK, who won for playing the male lead in Dilwale Dulhania Le Jayenge. Aamir, who stopped attending award shows since then thinking his performance was better suited for the award, was nominated for starring as Munna in Rangeela. However, Aamir won Best Actor Award at Filmfare this year for his performance in the Nitesh Tiwari-directed Dangal, in which he plays the role of Mahavir Singh Phogat.
Aamir gained 22 extra kilos for playing the role of older version of the wrestler in Dangal and got into a leaner form for featuring as the younger version of the Haryanvi wrestler after six months of extensive training. When asked about his massive physical transformation, he said: "As an actor it's necessary to bring about physical changes. I get swayed sway by the character I play and do not think about my health. I have been good so far."
Dangal done, Aamir will next be seen in Thugs Of Hindostan, in which he will co-star with superstar Amitabh Bachchan for the first time. "Thug is the only film I'm doing right now. Shooting will begin in June. This year I'm really excited about Thugs. This is my first chance to work with Big B. I'll get to learn a lot from an actor of the stature of Big B," said Aamir.
To all those, who are looking forward to a possible collaboration between Shah Rukh and Aamir, he said: "I met Shah Rukh only two times recently, one at a friend's birthday party and two days back I went to his house for a get-together. So, we meet as friends and haven't discussed work."
When asked about his birthday plans, Aamir said he will be spending the day with the real lifeDangal family comprising Mahavir Singh Phogat and his daughters. Actresses Fatima Sana Shaikh and Sanya Malhotra feature as Geeta and Babita in Dangal while Zaira Wasim and Suhani Bhatnagar played the younger version of the young wrestlers. When asked about Aamir's role as a well-wisher for the girls, he said: "I feel that all four of them are very talented girls. I don't think they need my advice but if they do, I am always there. I hope that they have wonderful careers. I think they will be a big asset to the industry."
Aamir Khan, now 52, will also be producing Secret Superstar, starring Zaira Wasim and also featuring Aamir in a special appearance. Thugs Of Hindostan will be directed by Advait Chandan and will be co-produced by his wife Kiran Rao. Thugs Of Hindostan is scheduled to hit screens on August 4.