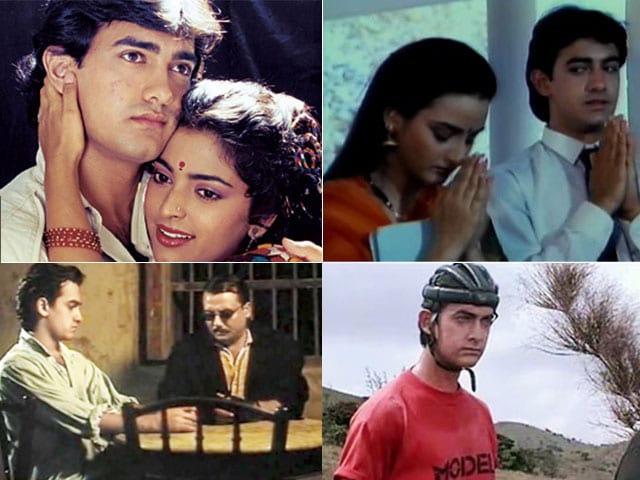 In the 30-odd years he's been on screen, Aamir Khan has transformed himself from teenybopper idol into serious actor and dedicated activist. His co-Khans, Shah Rukh and Salman, are still playing updated versions of the loverboy/saviour roles that first made them famous but Aamir, who makes or attempts to make cinema more meaningful than boy-meets-girl/boy-saves-world, is now unrecognizable from the floppy-haired Raj of Qayamat Se Qayamat Tak.

Perhaps the Aamir of Satyamev Jayate is simply a role that he has been preparing for his entire screen career. A glance through the actor's extensive filmography reveals that several films he starred in tackled themes and issues similar to those that he now highlights on his TV show. In almost every film, barring Fanaa and Dhoom: 3 in which he played the anti-hero, Aamir has defended honesty, integrity, courage, truth and justice - Satyamev, in fact, Jayate.

As Aamir celebrates his 50th birthday - the first of the Khan trinity to do so - here's a quick look at 13 themes on his socially responsible resume so far.

Honour killings: In an episode of Satyamev Jayate titled Intolerance to Love, Aamir took on the Khap Panchayats over what they described as 'immoral' marriages and honour killings, a direct fallout of family and Khap disapproval of these marriages. Two of Aamir's earliest films dealt with honour killings. In his breakthrough 1988 film Qayamat Se Qayamat Tak, Aamir plays Raj, the scion of a family of Thakurs. His father murders a rival Thakur's son to avenge the death of a pregnant sister who killed herself after her lover refused to marry her. When Raj falls in love with Rashmi, who belongs to the enemy family and runs away with her, Rashmi's grandfather orders that he be killed. In 1993's Parampara, he is the son of a gypsy woman murdered by the local Thakur for marrying the Thakur's son.

Dowry system: In the Satyamev Jayate episode titled Marriage or Marketplace, Aamir highlighted the stories of several young brides harassed for dowry, sometimes with tragic results. In 1990's Jawani Zindabad, he plays a young man who arranges two dowry-less marriages - his own and that of his sister. The consequences for his sister are almost fatal. His new brother-in-law rejects the dowry system as well, but his parents plot and scheme against their daughter-in-law.

Rape: Aamir tackled sexual violence against women on Satyamev Jayate in an episode titled Fighting Rape. In 1989's Raakh, the film he made right after QSQT, Aamir plays a young man who is forced to stand by as his female friend is raped by a local ganglord. Thirsting for revenge, he commits a spree of killings that finally lead him to the rapist.

Sports: The very first episode of season three of Satyamev Jayate dealt with Changing Lives Through Sports. In at least three films, Aamir stars as the recipient/dispenser of life lessons learnt on the field. In 1990's Awwal Number, he plays a young cricketer who dethrones a more seasoned player against the backdrop of a terror threat. In 1992's Jo Jeeta Wohi Sikandar, he plays high-schooler Sanju, a reformed slacker who wins the inter-school cycle race. As the rustic, colonial-era Bhuvan in 2001's Lagaan, he sticks it to the ruling British by beating them at cricket.

Social inequality: Several films starring Aamir explored the notion of relationships between those separated by class, caste or a financial divide. In 1996's Raja Hindustani, he plays a taxi driver who falls in love with and marries a poor little rich girl. In 2011's Dhobi Ghat, actor Prateik Babbar's working class character washes clothes and kills rats for a living and is unable to tell former banker Shai that he loves her. The clan enmity in Parampara is rooted in a yawning chasm of unequal social and financial conditions with the Thakurs and the gypsies perched on opposite sides. In Jo Jeeta Wohi Sikandar, an intense rivalry develops between Sanju's gang of underprivileged youth and the moneyed students from the other schools.

Divorce: In Akele Hum Akele Tum, the 1995 remake of Hollywood film Kramer vs Kramer, Aamir's character fights a bitter custody battle for his young son with who he connects and builds a relationship after a few false starts. The film also addresses the issues of single parenting and the struggle to strike a work-life balance that several women face after marriage and motherhood. In 2001's Dil Chahta Hai, Dimple Kapadia plays a middle-aged divorcee wallowing in alcohol-fuelled depression.

Disaffected youth: Several of Aamir's characters have been young men who become hostile and rebellious. In 1984 film Holi, which was his debut film, Aamir plays one of a group of college students who stop attending classes and later organize a larger resistance movement after a series of events that begin with the cancellation of a holiday on the festival of Holi. In Ghulam (1998), Aamir's character Siddhu fends for himself and is drawn into a web of organized crime that, in court, is blamed on his growing up disadvantaged and an orphan. In 2006's Rang De Basanti, Aamir and a group of college students are mobilized into violence after the government passes off the death of their Air Force pilot friend as human error.

Feudalism: Social structures depending on land ownership and the relationship between peasantry and gentry were explored in two films - Lagaan, in which a drought-ridden village challenges the taxes levied by the British Raj; and Isi Ka Naam Zindagi (1992), in which a land dispute arises after the aristocrat who donates a parcel of his estate to a farmer dies.

Religion: The much-debated PK, Aamir's biggest hit so far, stars the actor as a displaced alien searching for God but finding only religious posturing and fake godmen.

Patriotism: India and national sentiment has been a recurring thread in several Aamir films. In 2005's Mangal Pandey: The Rising, Aamir directly addresses the Indian Mutiny of 1857 as the eponymous soldier who rebelled against the East India Company. In Lagaan, of course, he bests the British at their own game. 1999's Sarfarosh and 2006's Fanaa deals with cross-border terrorism and Kashmiri separatism. In 1998's Earth, Aamir plays a Muslim ice cream seller in love with a Hindu nanny in the backdrop of the Partition. A large part of Rang De Basanti centers around the story of Bhagat Singh and his band of freedom fighters.

Dyslexia: In 2007's Taare Zameen Par, Aamir plays an art teacher who mentors an eight-year-old with learning disability. He also directed the film. Aamir has dealt with physical disability and mental health on Satyamev Jayate.

Education: Before being dethroned by Dhoom: 3 and PK, 2009's 3 Idiots was Aamir's (and India's) biggest blockbuster. Aamir stars as a young engineering student who is later revealed to have been at the institute under false pretences. The fake Rancho is later discovered running an alternative school in Ladakh, based on a real life one. Taare Zameen Par, of course, identifies a systemic failure in which schools are often unable to deal with dyslexic students.

Underworld and organized crime: Aamir stars as the desi version of Michael Corleone in the 1995 remake of The Godfather, Aatank Hi Aatank. In Ghulam, his character is the younger brother of an enforcer for a crime boss. Dhobi Ghat's Prateik also has a brother with connections to the underworld. In 2008's Ghajini, Aamir's character hunts down the ringleader of a human trafficking racket. In Talaash (2012), he plays a cop unraveling a web of blackmail, prostitution and murder.