Aamir Khan said: "I am not going on television to promote Dangal. We will have trailer and promo of our film" 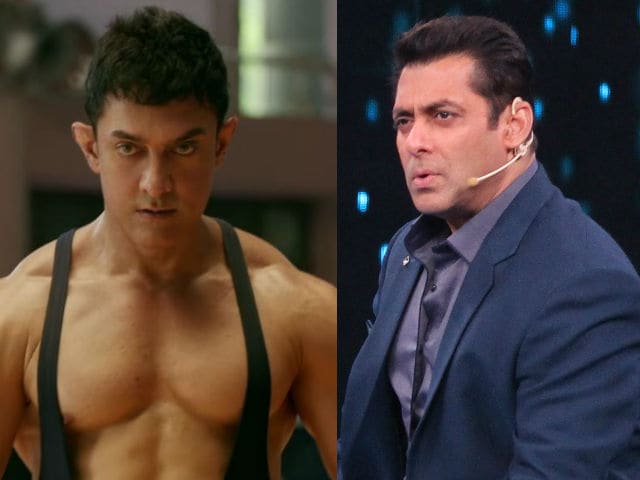 Aamir Khan hasn't promoted his films on Salman Khan's Bigg Boss so far and he's not going to start now. The actor has said that though he is "dying" to show his upcoming sports film Dangal to colleague and friend Salman, he will not promote the Nitesh Tiwari-directed movie on controversial reality show Bigg Boss 10, which features Salman as the weekend host. Aamir will skip promotions on one of the most viewed programmes on television but has assured fans that the show will telecast the trailer and promo of Dangal. The film is a drama based on the life of Haryanvi wrestler Mahavir Singh Phogat (played by Aamir Khan) who coached his daughters in his own sport, defying social disapproval and challenging patriarchal norms. His daughters Geeta and Babita Phogat won India's first medals in female wrestling at the 2010 Commonwealth Games. Geeta married fellow wrestler Pawan Kumar on November 20, with Aamir Khan participating in the wedding as part of the family.
"I am not going on television to promote the film. We will have trailer and promo of our film" said Aamir, 51, to PTI when asked if he would promote the film on Salman's Bigg Boss. "I am sure he loves to promote my film. Even I love to promote his film. I am dying to show him Dangal as well," Aamir added.
Salman publicised Aamir's 2013 film Dhoom:3 on Bigg Boss minus the star. The two Khans are friends of long standing and co-starred in Nineties cult comedy Andaz Apna Apna.
Meanwhile, Salman also featured in the sports drama film Sultan earlier this year. The film was a fictional story of Sultan Ali Khan, a wrestler who gains immense popularity and then loses everything due to hubris. He rises from the ashes of a dark past and emerges as a winner in the sport of mixed martial arts. The film also featured actress Anushka Sharma as a wrestler.
Aamir also said that he and Salman did not exchange notes on wrestling even though the subject of their films was somewhat similar. Although, while promoting Sultan, Salman had said that he had advised Aamir to not to sport six-pack abs when playing a wrestler. "There are different kinds of wrestlers. Like in an akhada you will see a wrestler who does mud fighting and is huge and has a paunch. But then there is Sushil Kumar (wrestler) who has a six-pack and he is fit. Even Geeta and Babita are fit and have no ounce of fat on them," Aamir said.
Meanwhile, celebs are often invited on Salman's weekend episodes of Bigg Boss 10 to promote their films. Vidya Balan reason the show last weekend to add a twist to Bigg Boss' Kahaani. Earlier, Deepika Padukone famously launched the trailer of her upcoming Hollywood debut, xXx: The Return of Xander Cage, on the show.
Alia Bhatt also promoted her film Dear Zindagi on Bigg Boss 10, without co-star Shah Rukh Khan. Later, SRK responded to a tweet from Salman asking people to watch Dear Zindagi on Anti-Obesity Day. Shah Rukh Khan promptly invited himself to lunch:


@BeingSalmanKhan will come over & do a workout before the biryani! https://t.co/xCJBJHj5pJ

Meanwhile, Aamir Khan said on Monday that Dear Zindagi's performance at the box office made him hopeful that the currency ban would not affect Dangal's ticket sales. "I believe Dear Zindagi is doing quite well. Hopefully I think it will not affect our film," he said, reported news agency PTI.
Dangal stars television actress Sakshi Tanwar as Mahavir Phogat's wife while Fatima Sana Shaikh and Sanya Malhotra play wrestlers Geeta and Babita Phogat. The film releases on December 23.
(With inputs from PTI)