Dangal: Aamir Khan dropped over 25 kilos while filming. His trainer explains how he did it 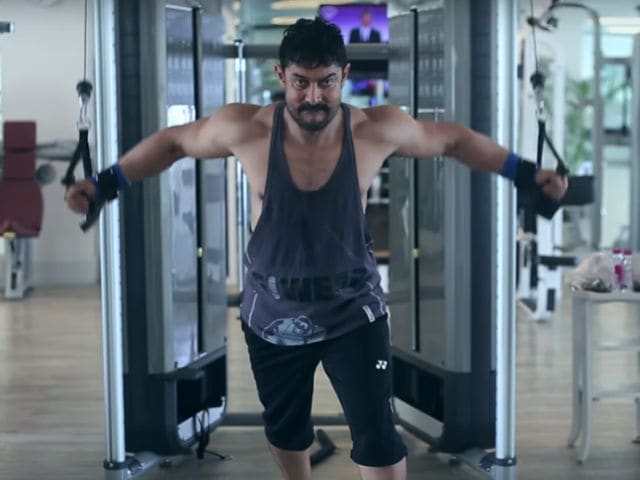 Some weeks ago, a video chronicling how actor Aamir Khan dropped over 25 kilos for Dangal went viral. The video, released as Aamir's 'fat to fit' transformation, documented his workout and training process, by way of which he made himself over to look like and play a wrestler in the film. The weight he shed was surplus - Aamir had put on extra poundage to play the wrestler as an older man. His extraordinary down-sizing has been making headlines for a while now because nobody can get over how he did it. Not for nothing is Aamir Khan, 51, called 'Mr Perfectionist.' Not only did he disregard Dangal director Nitesh Tiwari's suggestion that he wear a fat suit as the middle-aged Mahavir Singh Phogat (the wrestler he plays), he whittled his body down in just five months (accompanied by cursing from dieters everywhere). Aamir's trainer Rahul Bhatt spoke to mid-day.com about their training process.
To begin with, Aamir Khan loves to eat. "We didn't cut out carbohydrates, because then, he'd [Aamir] be thinking about food all the time. Besides, given his activity level, he needed the energy," Rahul told mid-day.com. After the video that went viral was released, several experts were of the opinion that a transformation this drastic could not have been achieved without steroids. There were no steroids, Rahul told mid-day.com: "It was a result of the actor's perseverance and sweat. There is no substitute."
Aamir Khan worked out for almost five hours a day, usually beginning at 4:30 am. "Aamir was aspiring to look like an athlete, and so, trained like one. The exercise routine comprised compound movement and cardiovascular activities. There was an AM workout and a PM workout. In addition, there was almost an hour of wrestling practice. The actor would also play squash and tennis," Rahul revealed to mid-day.com.
Video: Watch the video of Aamir Khan's transformation that went viral

Dangal is based on the true story of Haryanvi wrestler Mahavir Singh Phogat and how he trained his daughters Geeta and Babita Phogat, played by actresses Fatima Sana Shaikh and Sanya Malhotra, to become medal-winning wrestlers.
Dangal is co-produced by Aamir Khan, Kiran Rao and Siddharth Roy Kapur. It also stars Sakshi Tanwar. The film's title track, sung by Daler Mehndi, was released on Thursday.Dangal will hit the theatres on December 23.