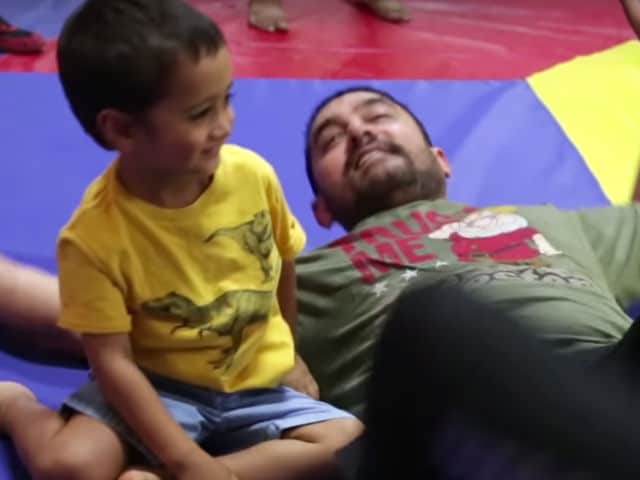 Aamir Khan's latest film Dangal is making history and collecting big bucks at the box office. But the promotional spree for the Nitesh Tiwari-directed film hasn't ended yet. The makers of the biopic on wrestler Mahavir Singh Phogat released a behind-the-scenes video of Aamir Khan, 51, describing how he trained in wrestling to become Mahavir Phogat. The first few seconds of the video, shared on Tuesday, however has a scene will is totally 'aww'dorable. Aamir's five-year-old son Azad accompanied his father to the wrestling training and Aamir showed his son a few moves - only Azad outsmarted him.
Watch Aamir Khan's wrestling match with Azad:

Aamir Khan, 51, married filmmaker Kiran Rao in 2005 and the couple welcomed their son Azad in 2011. Aamir was earlier married to Reena Dutta and together they have two children - daughter Ira and son Junaid. Aamir Khan and Kiran Rao are currently in Panchgani for their anniversary.
In Dangal, which released on December 23, Aamir Khan plays wrestler Mahavir Singh Phogat who hoped to win a gold medal in the sport for India. He wanted a son to fulfill his dream however in a moment of epiphany he realizes his choriyaan are no less than the chore. And then, against all odds, he coaches his daughters Geeta and Babita and finally after many ups and downs, Geeta won a gold medal in 2010 Commonwealth Games.
Aamir's film opened to fabulous reviews and kept the cash registers ringing all weekend. The film collected a handsome sum of Rs 132.43 crore until Monday. Dangal's Sunday collection - Rs 42.35 crore - set a new box office record for the highest single day takings of any film, displacing Salman Khan's Sultan.
After Dangal, Aamir Khan will be seen in Thugs of Hindostan, along with Amitabh Bachchan. The Yash Raj Films production will be directed by Vijay Krishna Acharya, whose worked with Aamir before in YRF's Dhoom: 3.