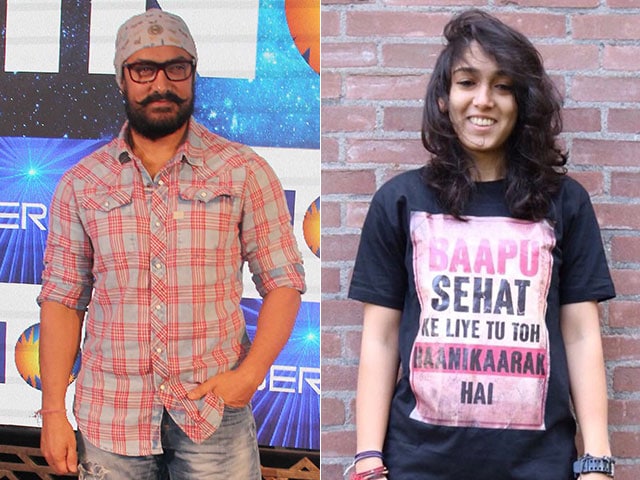 The countdown to Aamir Khan's Dangal has officially begun and the actor's new film received an endorsement from someone very special. Ira Khan, Aamir's daughter with former wife Reena Dutta, got into Dangal mode recently and it seems the vibe was contagious with her friends helping out in a spot of Dangal publicity. Ira and her friends happily wore T-shirts with the slogan Bapu sehat ke liye tu to haanikaarak hai. An excited Aamir, 51, posted pictures of Ira and her friends on his Twitter account on Tuesday. In Dangal, Aamir Khan plays real life wrestler Mahaveer Singh Phogat who trains his daughters Geeta and Babita to be medal-winning wrestlers. Geeta won gold at the 2010 Commonwealth Games while Babita clinched the silver. These were India's first medals in female wrestling.
It appears that Aamir Khan isn't half as haanikaarak as the man he plays on screen. 'Wait till you meet the real Mahaveer,' he tweeted.


Look what my daughter and her friends are up to! Thank you Ira!!! Wait till you meet the real Mahaveer ! pic.twitter.com/tJ9lbMcXOh

The way Aamir Khan got into the skin of the character of wrestler Mahaveer Phogat has been awe inspiring. A video documenting his transformation from pot-bellied father to ripped wrestler went viral recently. The actor shed 25 kgs he had put on to play Mr Phogat as an older man in just five months, in order to film his scenes as a young man.

Aamir Khan is currently on a promotional spree for Dangal. The actor will soon be seen on the next episode of director Karan Johar's chat show Koffee With Karan Season 5. He will be accompanied by his Dangal 'daughters,' actresses Fatima Sana Sheikh and Sanya Malhotra who play wrestlers Geeta and Babita Phogat respectively. In the promo of the episode, which will air this Sunday, Aamir says he cried while watching the trailer of Dangal.
Meanhwhile, Fatima and Sanya claim that they are Aamir's only friends, which could be true as of now since the actor is devoted heart and soul to Dangal.


Up next, @aamir_khan will be here to wrestle with Karan Johar's personal questions! #KoffeeWithKaranpic.twitter.com/GUWxhzhytI