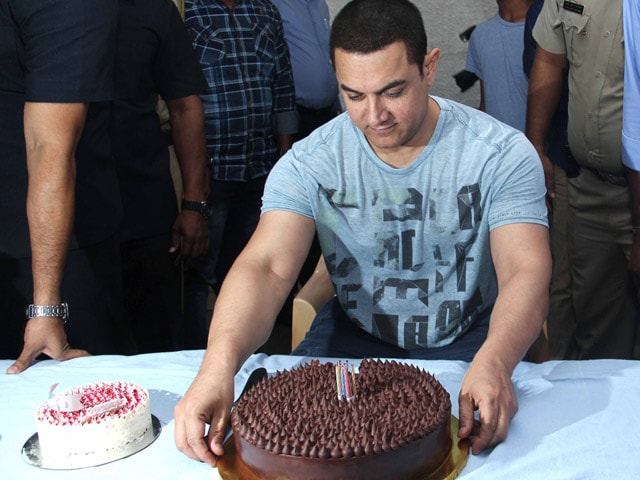 Aamir Khan celebrated his birthday in the basement of his Bandra apartment.

Friday the 13th had an auspicious beginning for actor Aamir Khan as he celebrated his birthday a day in advance in the basement of his Bandra apartment in Mumbai. For many years now, Aamir has been celebrating his big day with the media and didn't want to break the tradition.

"Kiran has planned something for me and wants me so I wouldn't be in Mumbai on my birthday. However, I didn't want to break this tradition of celebrating with the media and thus I shifted the celebrations to a day earlier," he said. (Also Read: Aamir Khan Says he Has no Idea What's Planned For His 50th Birthday)

This is a landmark year for the perfectionist as he turns 50 in less than 24 hours. Age, however, is just a number for the Khan.

"Often, once people turn adults they start taking themselves too seriously and I say to myself, 'Kya uncle type ka aadmi hai' forgetting most of the times that I myself am of the same age," Aamir said. (Also Read: Aamir Khan, Almost 50, Says He's 'Still 18')

It may be an important year for Aamir but he has no grand plans as far as his films go for 2015. In fact, there will be no Aamir release this year with the PK star currently focusing on Dangal which will release in 2016.