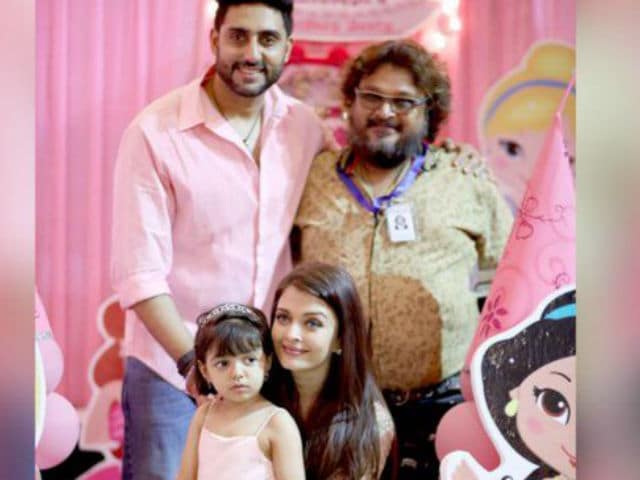 This image was posted on Twitter by Amitabh Bachchan FC

Actor couple Abhishek Bachchan and Aishwarya Rai's daughter Aaradhya turned four on November 16. For her father she is a "little angel" and for her mother she is a "princess". Therefore, her birthday celebration was no less than a royal fable.
Aishwarya organised a princess-themed party for Aaradhya, considering her love for Disney princesses, read a statement. According to a source, the preparations for the party were on for last four days. (In Pics: For Birthday Girl Aaradhya Bachchan, a Party Fit For a Princess)
"Aishwarya kept a close eye on all the arrangements for the special day. And most of Bollywood celebrities and their children were invited to Aaradhya's birthday party, which was held at Pratiksha," the source said.
The Bachchans invited actors Genelia D'Souza, Riteish Deshmukh, Raveena Tandon, Tara Sharma, Sonali Bendre, Konkona Sen Sharma with their children to the birthday bash.
Meanwhile, Abhishek wished his daughter on Instagram by sharing a sketch of Aaradhya made by an Indonesian visual artist:

Happy birthday my little angel!! This beautiful sketch is made by the super talented @fifipewz thank you. #happybirthday #daughtersarethebest

Actor Amitabh Bachchan posted on his blog that he will spend time with his granddaughter. On the eve of Aaradhya's birthday, Big B wrote: "Because the 'little one' celebrates her birthday tomorrow the 16th day of November and my presence must remain with her. She was here a short while ago before retiring for the night. I cuddled her and told when she wakes up it shall be her birthday and there shall be many that shall come to wish her and bring presents for her, and she replied immediately, 'yes but I shall be giving them presents too'. She was referring to the return gifts that are given to invited children, when they leave a birthday party."