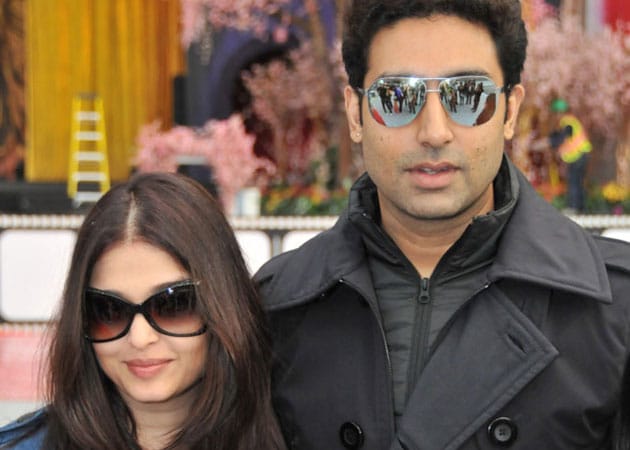 Abhishek Bachchan credits his success to his wife Aishwarya

Abhishek Bachchan, who won the best actor comic award on Saturday at the TOIFA for his funny role in Bol Bachchan, dedicated it to wife Aishwarya Rai Bachchan.

Abhishek Bachchan, who won the best actor comic award on Saturday at the TOIFA for his funny role in Bol Bachchan, dedicated it to wife Aishwarya Rai Bachchan and also thanked the entire cast and crew of the film for believing in him.
"Bol Bachchan is very, very special film to me and I stand here in front of you humbly receiving the award," said Abhishek and thanked the film's director Rohit Shetty and co-star Ajay Devgn for "having faith in me".
Apart from the film's cast and crew, the 37-year-old also made a special mention of his actress wife Aishwayra in the acceptance speech on Saturday.
"I would like to thank my family for firstly having me because things wouldn't have worked without that. I really owe this to Aishwarya and the love and support she has given me. She makes me the person that I am," said the actor after winning the trophy at the first edition of (TOIFA) Times of India Film awards 2013.
Abhishek, who also performed at the event, said it was a long due gig for his fans in the city.
He said: "Almost five years ago me and my family were scheduled to perform in Vancouver for the Unforgettable tour (in 2008). Unfortunately, the show in Vancouver got cancelled and I promised I will make it up to you and I hope that was a bit of a payback. And I promise you next time I won't only bring Aishwarya, I will bring dad (Amitabh Bachchan) as well," he said.
"But Shiamak, you will have to choreograph it," said the 37-year-old, whose act was choreographed by Indian Contemporary Dance choreographer Shiamak Davar.
He later called up Krushna, his co-star from Bol Bachchan, and handed over the award to him saying, "you deserve this".