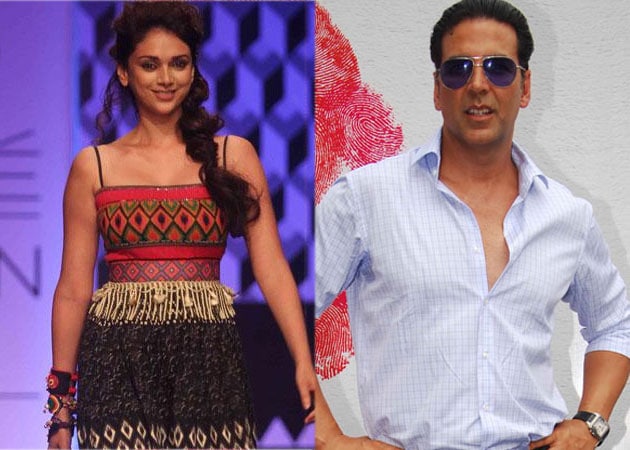 Actress Aditi Rao Hydari, who wll be seen opposite Akshay Kumar in upcoming release Boss, says her acting prowess impressed her co-star and she bagged the offer.

Actress Aditi Rao Hydari, who wll be seen opposite Akshay Kumar in upcoming release Boss, says her acting prowess impressed her co-star and she bagged the offer.
Aditi, who will not be romancing Akshay in the film, said she is happy to share the screen space with him.
"In this film there is no girl opposite him. When I first met him he said we thought you are simple, sweet girl next door but later they saw my photo shoot and found me glamorous. He found me hard working and talented and good actor," Aditi said.
"He (Akshay) said he saw potential in me and hence he chose me for the film. That was one of the biggest compliments that came from him. He said he has given break (work) to Katrina Kaif, Sonakshi Sinha and now me which is a great thing. It was great fun working with Shiv Pandit.. People of same age group bond easily at various levels as they have same concerns," Aditi said.
For Aditi, the year 2013 seems to be good as her performance was praised in Murder 3.
"I am glad that Murder 3 did well. I came across a statistic saying Chennai Express is on number five and Murder 3 is on number six. And now I have Boss. It has been a good and fun year," she said.
The actress has a small role in the masala entertainer and she feels she will bring freshness to the film.
On sporting a bikini in the film, she said, "By doing a masala film or wearing a bikini, I am not trying to change my image. The fact is that India is regressive, it is sad that it is like that. We come from very free spirited heritage of art and culture. If people view wearing bikini as a problem then dirt is in their mind and not in mine. I am comfortable wearing a bikini. As long as people filming it are not going to make it cheap, I don't have a problem," she said.
The film is directed by Anthony D'Souza and also stars Shiv Pandit, Mithun Chakraborty, Danny Denzongpa and Ronit Roy. It releases on October 16.