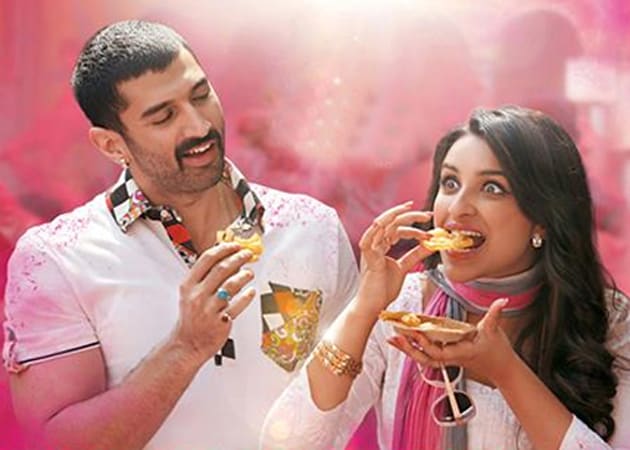 Actor Aditya Roy Kapur is glad that he is only 'high' on food in his next film Daawat-e-Ishq.

Actor Aditya Roy Kapur played the role of an alcoholic in his last two films Yeh Jawaani Hai Deewani and Aashiqui 2, but the actor is glad that he is only 'high' on food in his next film Daawat-e-Ishq.
In both of his previous films, the 28-year-old actor was seen playing characters addicted to alcohol, and he pulled it off well. Now, Daawat-e-Ishq, directed by Habib Faisal, will see him play a cook from Lucknow and actress Parineeti Chopra will play his love interest.
"I guess I am good at playing a bevda (drunkard). But I don't want roles where I am required to a play an alcoholic anymore. I think I should include it in my contracts. But in this film (Daawat-e-Ishq), my character is high on food," Aditya said.
He was in Delhi with Parineeti on July 17 to launch the first song of the movie, produced by Yash Raj Films.
Talking about his character, Aditya disclosed that he plays Tariq, a happy-go-lucky man.
"In the previous films, I feel my characters have had a very serious undertone. In this film, I play a happy soul. He is guy with a big heart. I am glad that I got to work with Habib who has seen so much in the world and it is because of him that I was able to play this character," he said. (Also read: When Aditya Roy Kapur Wooed Parineeti With his Daawat-e-Ishq)
There's also something Aditya has done in the film that he's not done much earlier.
"I haven't done many song and dance (sequences) in my previous films, and always tried to be in the corner of the frame whenever there was a song. But in this film, I have tried to dance and it was fun. But yes, I had to rehearse a lot," he said.
Daawat-e-Ishq, releasing on September 5, also stars veteran actor Anupam Kher and TV actor Karan Wahi.