Rishi Kapoor's Angry. KRK's Angry. Next, There May be a Lawsuit 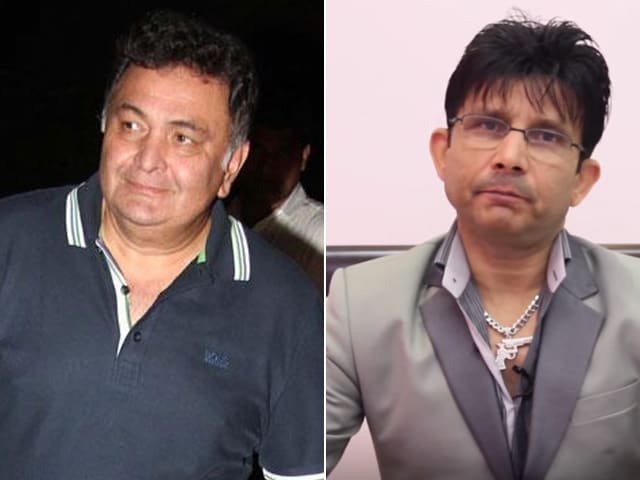 After a series of incendiary tweets from him prompted actor Rishi Kapoor to say he was going complain to Twitter authorities, actor-producer Kamaal R Khan has returned fire with this tweet, in which he claims he will be taking legal action against the 63-year-old star.


I file case of defamation n harassment against Rishi Kapoor in mumbai court on Monday because his irresponsible behavior is unacceptable.

KRK, as Mr Khan is known, also included the websites reporting on his tweets and Twitter itself, or so it appears:


All websites who are accusing me, #Twitter n Rishi Kapoor will be party in the defamation n harassment case which will be filed on Monday.

On Thursday, Rishi Kapoor exploded after KRK trolled him in a series of typically foul-mouthed tweets. Mr Kapoor said he would make an official complaint:


Reporting this to the Twitter officials for foul language https://t.co/6sfUVgaiw7

We're not going to reproduce KRK's rant against Mr Kapoor (and his actor son Ranbir who is not on Twitter) because most of the tweets contains abusive language. (Also Read: Rishi Kapoor is Really Mad Now. KRK Just Trolled the Wrong Person)
This tweet below is actually the most polite in the series:


He @chintskap drinks a litre alcohol evry night to take out his frustration n start tweeting bad abut ppl. This is why evn his son left him.

KRK, who describes himself as an actor-producer, has riled several Bollywood celebrities on social media by making them the subject of insult and filled-tweets, seemingly unprovoked. Ranveer Singh allegedly blocked him on Twitter after KRK reviewed the actor's appearance on the controversial AIB Roast in the filthiest of terms. KRK's also been described by actress Sonakshi Sinha as a 'waste of space' and hashtagged a #lowlife by Queen's Lisa Haydon.