Shah Rukh Khan's photos on the sets of Salman Khan's Tubelight have emerged, appearing to prove that he is, making a special appearance in the film 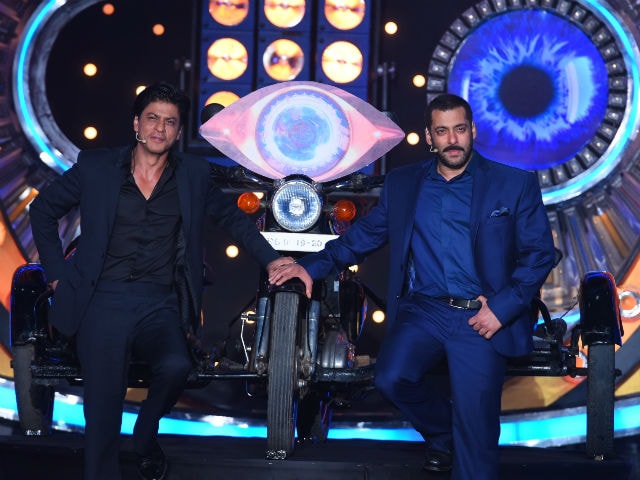 Shah Rukh and Salman on the sets of Bigg Boss 10

After that neat piece of hedging from actor Shah Rukh Khan last week, photos of him on the sets of Salman Khan's Tubelight have emerged, appearing to prove that he is, in fact, making a special appearance in the film. The big reveal comes from Tubelight actor Nasir Khan, the son of legendary comic Johnny Walker. Nasir Khan has posted three pictures of himself with SRK, Salman and director Kabir Khan on the sets of the film. Some days ago, websites began reporting on SRK's cameo after a tweet from trade analyst Komal Nahta, which he later deleted. Later, SRK told the press at the launch of a celebrity calendar, "Even I have heard about the news, but you should ask the producers, they will give you the right answer," reported news agency PTI.
Smooth, SRK, very smooth. Here are Nasir Khan's posts - surely the Khans weren't just hanging out?

Shah Rukh Khan and Salman Khan, both 51, haven't been seen on the big screen since 2002's Hum Tumhare Hai Sanam. They delivered one of the Nineties biggest hits in Karan Arjun, which celebrated 21 years yesterday:

SRK and Salman infamously feuded for six long years, punctuated by made-for-the-camera hugs at iftaar parties, and only repaired their relationship two years ago. SRK will be promoting his new film Raees on the Salman-hosted reality show Bigg Boss 10.
This tweet from Komal Nahta sent a frisson of excitement through the press and fans last week: "Confirmed news, guys. Absolutely great news. Shah Rukh Khan will play an important cameo in... hold your breath... Salman Khan's Tubelight." He later deleted the tweet.
Tubelight is a war drama that co-stars Chinese actress Zhu Zhu. It will be a posthumous appearance for actor Om Puri, who died earlier this month. Salman Khan has previously been directed by Kabir Khan in Ek Tha Tiger and Bajrangi Bhaijaan.