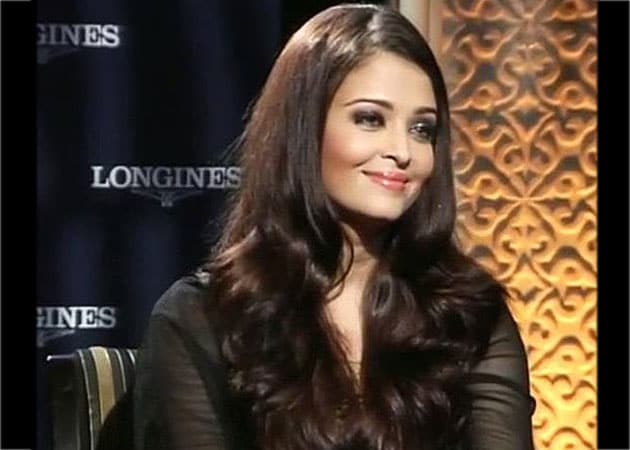 "It's going to be an exciting November 2013," says the most beautiful woman in the world, Aishwarya Rai Bachchan. She says she feels blessed.

"It's going to be an exciting November 2013," says the most beautiful woman in the world, Aishwarya Rai Bachchan. She says she feels blessed.
The actress was in New Delhi to celebrate watch brand Longines' quest for the oldest watch and launch a new edition ' Conquest'. The lady who has conquered the world and hearts of millions of people, says each day, each moment, one should go with the flow and celebrate the small and big things in life.
The important question which all her fans would like to know is when will the actress make a comeback? The actress, who looked beautiful in a black silk lehenga and blouse, said, "I haven't realised time has flown by so quickly, I am busy attending to my daughter, meeting my professional commitments, I thank my fans. I am being approached by a lot of people I worked with, my directors, but as of now I cannot commit! Let's see." So will we see her pop the champagne and say Happy Anniversary with husband Abhishek? She says," Well, Prahlad Kakkar was the one who launched me. He is family and I had promised I would do his first film. He had a concept of a story about a couple and Abhishek and me seem to fit it, but nothing concrete as of now, let it take shape".
So is she doing a cameo in Happy New year? Aishwarya says," Yes , I was approached for the film but I wasn't working opposite Abhishek in it, and it really wouldn't work out that way , so things didn't fall into place but soon , will be back soon."
As of now I am looking after my daughter and loving every moment of it. Well, we definitely can say that Aishwarya is looking every inch of the yummy mummy that she is.