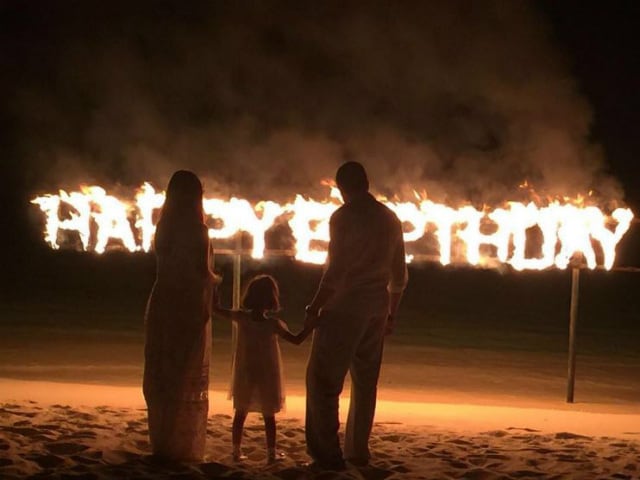 "Aishwarya has some surprises lined up for him. She has planned an intimate get together with his close friends at their hotel suite post the match and is also overseeing the decoration bit. The party menu includes all dishes of Abhishek's choice," revealed a source

Abhishek Bachchan turns 40 today, but the actor chose not to bring in his milestone birthday with a big bash in the company of industry folk at his abode, Jalsa. Instead, the Bachchans had a private celebration in Maldives where they had taken off for a short vacay. But that does not mean Junior B is going austere this year; his actress-wife Aishwarya Rai Bachchan has planned a birthday party for him in Bengaluru today.
The Bachchans will be flying into the Garden City where his kabaddi team, Jaipur Pink Panthers take on the Bengaluru Bulls in the ongoing Pro Kabaddi league at the Sree Kanteevera Stadium tonight. Post the match, Ash has planned a bash for him with near and dear ones on the guest list.
Says a source, "Abhishek wanted to usher in his 40th birthday away from media glare. He wanted it to be a family affair away from Mumbai, so he whisked his folks to Maldives. Apart from his parents, Amitabh and Jaya, sister Shweta, wife Aishwarya, and daughter Aaradhya, some family members and close friends were also with him. They were staying at a plush resort at Kaafu Atoll in Maldives."
On Wednesday, Sr Bachchan posted an aerial view of Mumbai as well as a palm-beached tropical sunset on Twitter and stated, "From this to this." The veteran gave a hint that he was holidaying on the picturesque island. Adds the source, "Since his birthday coincided with the match in Bengaluru, Aishwarya decided to throw a party there. She has some surprises lined up for him. She has planned an intimate get together with his close friends at their hotel suite post the match and is also overseeing the decoration bit. The party menu includes all dishes of Abhishek's choice. He is hoping his team wins tonight so that celebrations can begin from the stadium itself."
For the last few days, the actress had been juggling her shoot for Sarabit besides keeping constant vigil on Aaradhya, who was under the weather, and making plans for Abhishek's big day. Ash's spokesperson confirms that she is hosting a birthday party for Abhishek in the Karnataka capital. (Also Read: Abhishek Bachchan: Happy to See Aishwarya Step Out of Comfort Zone: Abhishek Bachchan: Happy to See Aishwarya Step Out of Comfort Zone)
Here are some photos from Abhishek Bachchan's birthday celebration in Maldives.

Life is a journey which is far more enjoyable when your holding hands with the ones you love.

T 2135 - To all that have sent messages through me for Abhishek on his birthday .. gratitude and thank you ! pic.twitter.com/xyjbwPYTi2