Aishwarya and Sonam at Cannes and Lupita Nyong'o at the Oscars

Here's our fashion report card for 2014

A fashion recap of 2014 gives us many great looks from Indian fashionistas like Aishwarya Rai Bachchan and Sonam Kapoor to Hollywood stars like Jennifer Lawrence and Lupita Nyong'o. Here's our fashion report card for 2014. 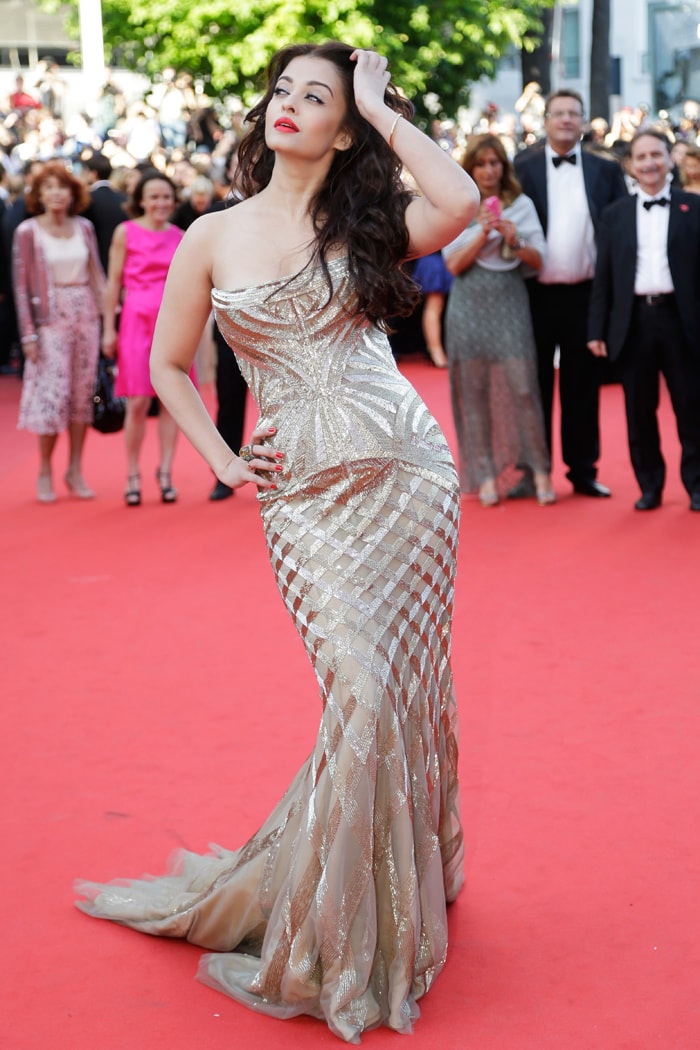 Long reviled for wearing frumpy Abu-Sandeep anarkalis on the French Riviera, Aishwarya started this Cannes year in a molten gold Roberto Cavalli dress that clung lovingly to her curves, finished with a coral lip. She was flawless in every way, even more so considering that the exact same dress sent Hollywood actress-singer Kristin Chenoweth straight to the Oscar worst-dressed lists. Can you say bombshell? 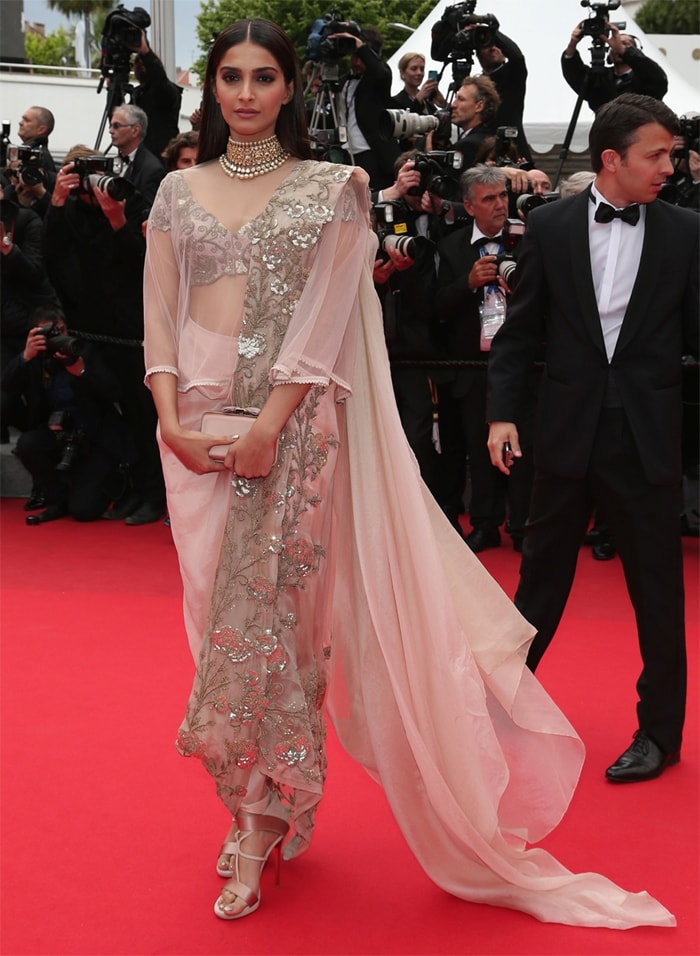 There are some outfits only Sonam can wear. And there she was, in an Anamika Khanna dhoti-sari with a tissue overlay; accessorised with her pretty smile and a choker designed by her mother, Sunita Kapoor. Other accessories included Jimmy Choo sandals, Ferragamo clutch and oodles of fashion chutzpah. 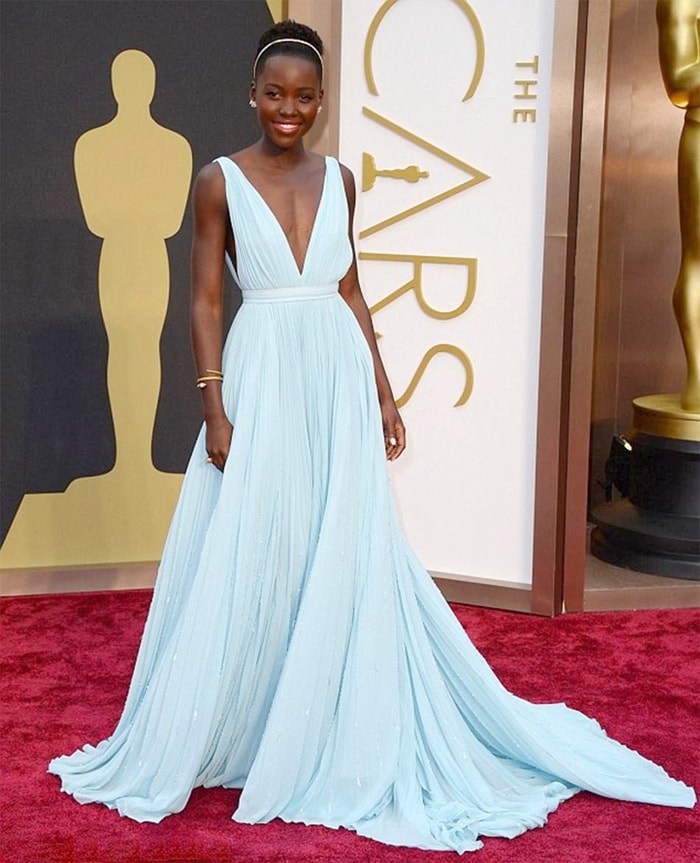 The Mexican-Kenyan actress made a sensational debut, both film and fashion-wise. If taking home the Best Supporting Actress Oscar wasn't enough, 12 Years a Slave star Lupita also walked away with the red carpet honours, in a pale blue pleated Prada gown accessorised with Fred Leighton ear-cuffs. 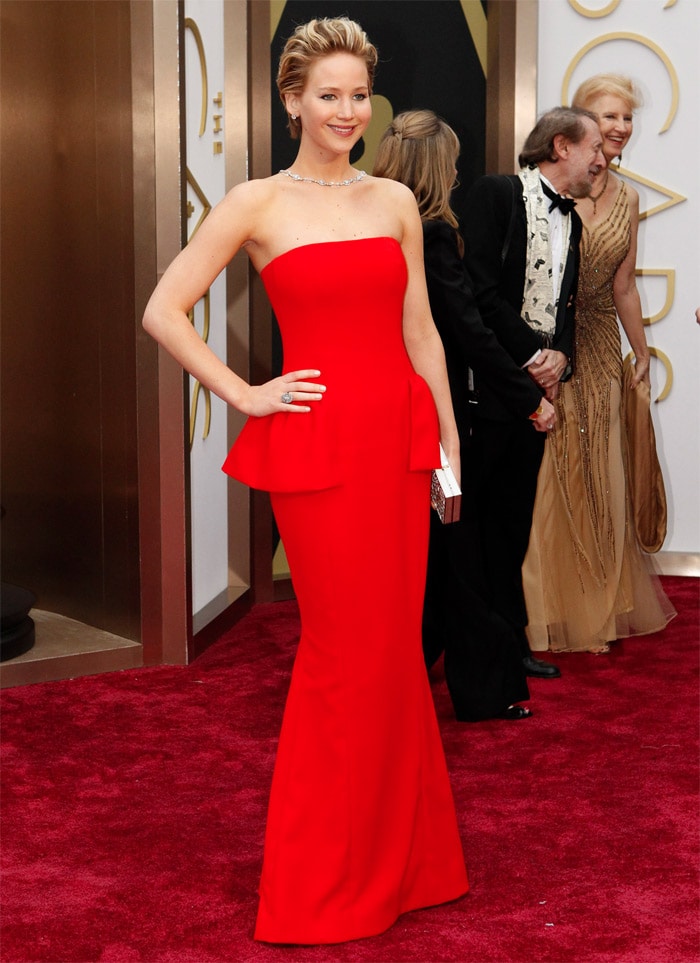 JLaw, who is wedded to Dior, has mostly had triumphs with the French couture house. This siren red peplum-waisted column, styled with a loose chignon and accessorised with a glittering diamond necklace, was one of the fashion moments of the year. Jennifer was classy and even after tripping over her dress, as she does, she stayed firmly put in the good books of the fashion police. 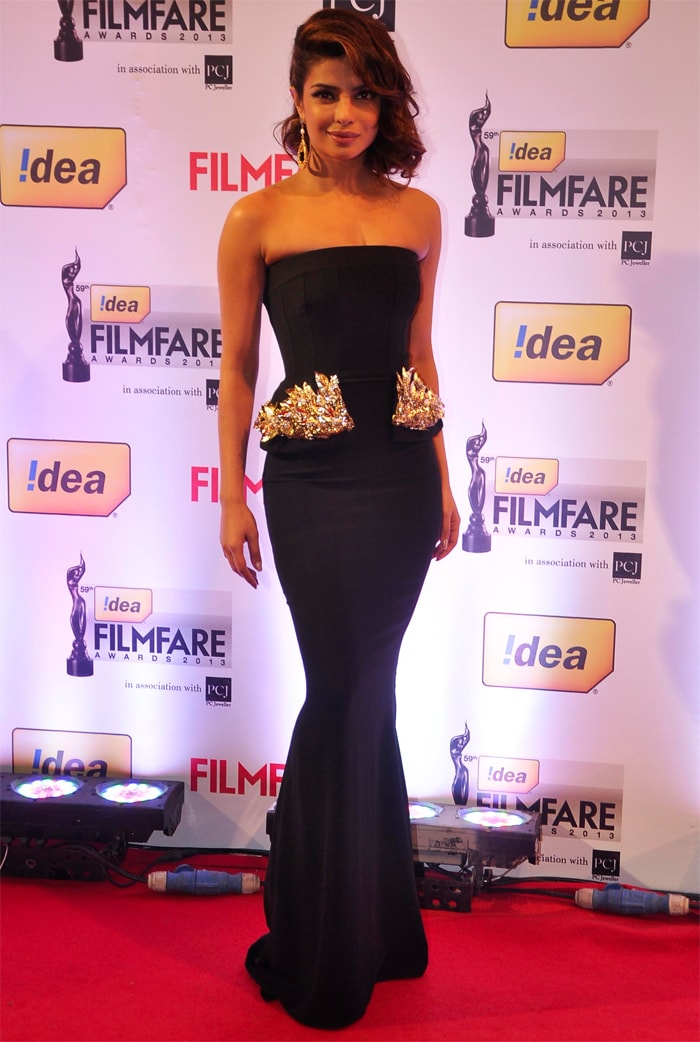 Priyanka is one of the leading desi-fashionistas, and she kept our faith with her bewitching look at the Filmfare awards in a pretty Alexander McQueen gown. 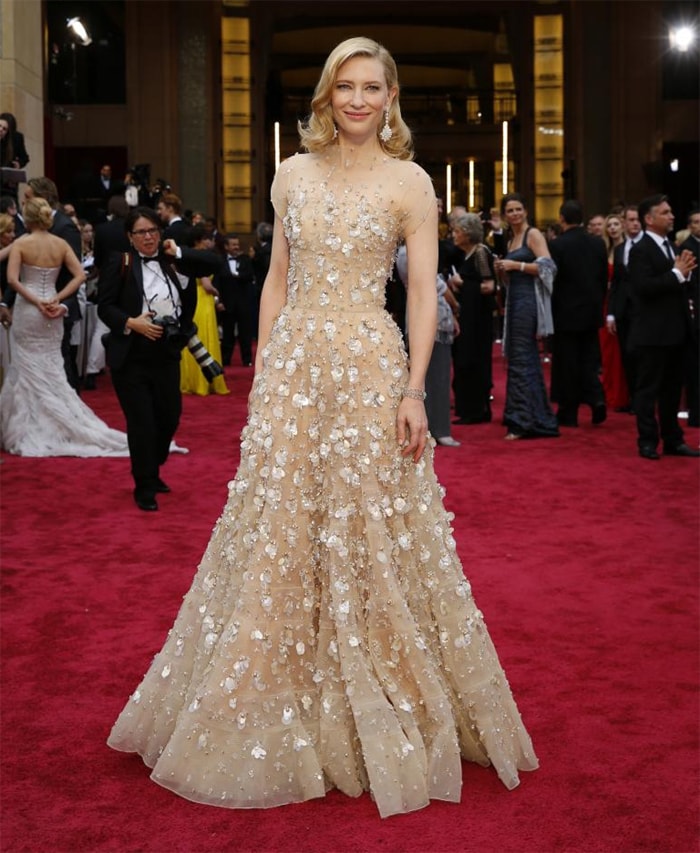 Best Actress Cate is as feted for her fearless fashion as her film roles. This year, she was a sheer delight in a champagne gold Armani Prive gown studded with Swarovski crystals and accessorised with Chopard ear drops. 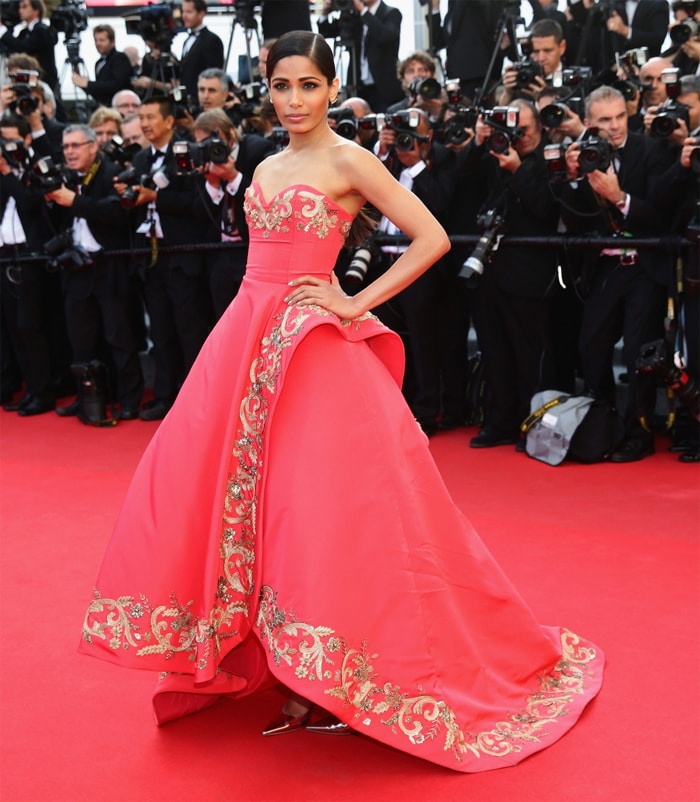 India's most stylish export to Hollywood walked the red carpet in coral Oscar de la Renta. For a perfect finish, she opted for smokey eyes, sleek pony tail, metallic pumps and gold ear-cuffs. This is not only one of the top looks this year, but also one of the best looks the late designer (who died this year) gave to fashion enthusiasts. The starlet may have had a Marilyn Monroe moment at the Cannes red carpet, but Jessica still wowed her fans in a jewel-toned Ellie Saab gown that she wore with Roger Vivier pumps and Tesiro jewels. 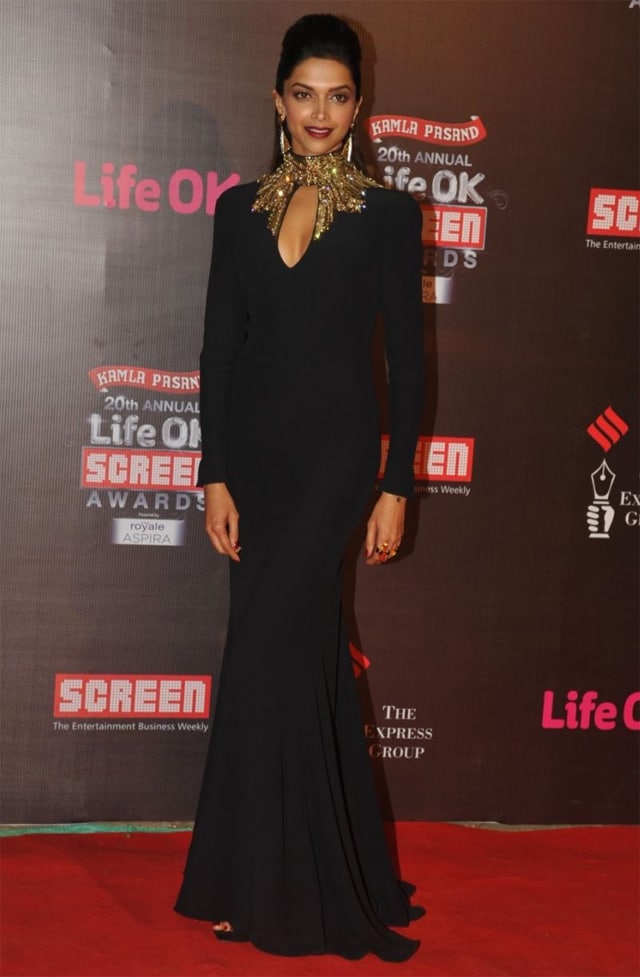 Deepika Padukone, has come under the scrutiny of the fashion police for imitating the Hollywood stylistas. Then again, what's the harm; Deepika has done justice to all those looks. She was at the top of her game with various fashion styles. We picked this look in a black Alexander McQueen with an embellished collar. 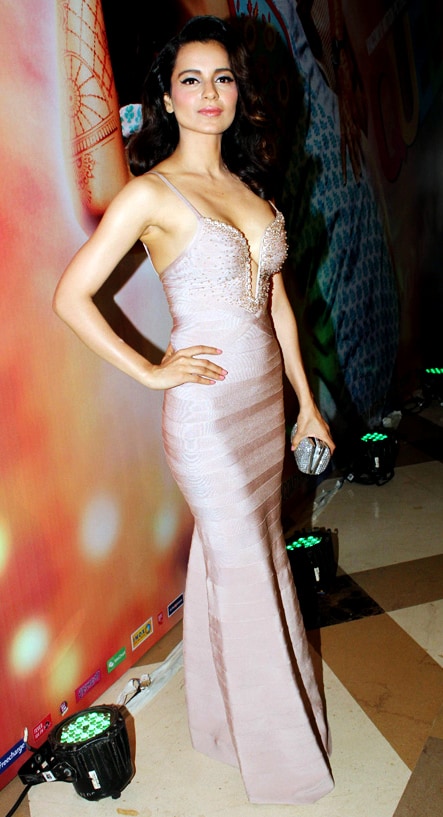 The actress Queened it over the rest in a beige Herve Leger bandage dress with a plunging neckline. Kangana ditched her curls in favour of a soft wavy hairdo. We like!