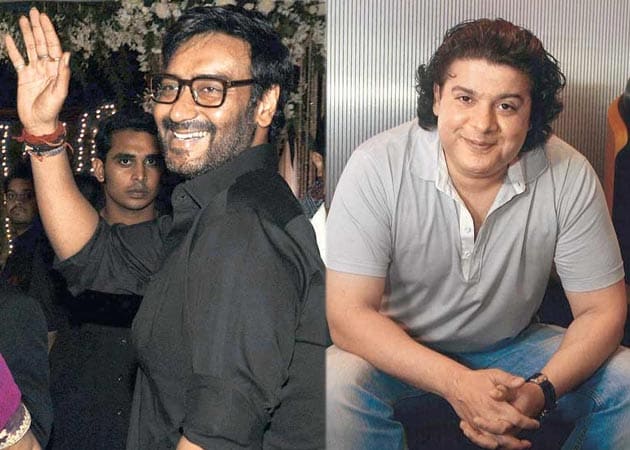 Ajay Devgn smartly pulled off a prank on his director while on a shoot of Himmatwala remake.

Ajay Devgn is considered to be the biggest prankster in Bollywood. Every film set he is part of, there are stories of his antics. Whether it is his co-stars, unit hands or the director, no one is spared.
His Smart Alec operations are done so smoothly that no one can ever suspect that it is his handiwork! One such instance of him being at work is from his current project - Sajid Khan's remake of 1980s Himmatvala.
The star played a prank on Sajid Khan in the hotel where they were staying while shooting in Hyderabad. Ajay Devgn managed to sneak into Sajid's bathroom and leave bloodprints on the mirror and walls. And not for a moment did the director suspect that it was the actor's handiwork.
"Sajid Khan was in the room watching a cricket match and had used the washroom. He then got busy with a phone call. When he entered the bathroom again, he was shocked to see the bloodstains. There was no way anyone could have entered it," according to a unit source.
"While he was watching the match, Ajay Devgn and Adhyayan Suman, who is also part of the film, had dropped in for a while. But he was sure that there was no way either of the two had been to his bathroom," added he source.
The blood marks was the topic of discussion on the sets and even the hotel staff wondered who had done it. But it was only after a couple of hours that Ajay Devgn revealed that it was he who had done this. And Sajid Khan kept wondering when did Ajay enters his bathroom.
"I had heard of Ajay Sir being a master prankster. This incident baffled everyone as no one had seen Ajay enter the room," said Adhyayan.