The rival films are releasing together this Diwali. On Twitter, KRK has dismissed Ajay's film as 'Himmatwala 2,' a reference to the flop film he starred in a couple of years ago 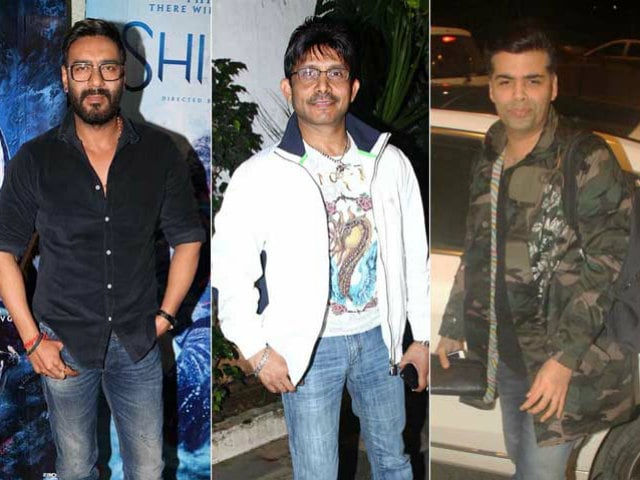 The plot thickened in the Shivaay vs Ae Dil Hai Mushkil clash last night. In an extraordinary development, Shivaay star and director Ajay Devgn posted audio of a conversation between self-styled critic Kamaal R Khan and Shivaay co-producer Kumar Mangat. The clip records KRK claiming that Karan Johar, director of Ae Dil Hai Mushkil, paid him Rs 25 lakhs to tweet in favour of his film.
The rival films are releasing together this Diwali. On Twitter, KRK has dismissed Ajay's film as 'Himmatwala 2,' a reference to the flop film he starred in a couple of years ago.
In the recorded conversation, Kumar Mangat asks KRK why his tweets are so anti-Shivaay and pro-Ae Dil Hai Mushkil. "Have to tweet good things about Karan Johar's film, he paid me 25 lakhs," says KRK.
This is Ajay Devgn's tweet:


Hear what self proclaimed no. 1 critic and trade analyst Kamaal R Khan has to say. https://t.co/wRc7moSlsZ

In a statement released on Thursday night, Ajay said: "I have been a part of the Indian film industry for the past 25 years and have been associated with over 100 films. My father was a professional action director and I have emotional connection with this industry. It therefore pains me to see that people like Kamaal R Khan are holding the film industry to ransom by spreading negativity about films to extort money from producers."
He also wants an investigation: "It is very sad that people from our own industry are supporting such elements and spoiling the ethos of industry. I would strongly demand that this be thoroughly investigated by competent authorities to clarify if Karan Johar was indeed involved in this."
No Investigation might be necessary because KRK himself soon posted a tweet saying that he made up the bit about being paid by KJo.


Let me clear it. Karan Johar has never paid me or asked me to bash #Shivaay n you can hear it in the tape. I said 25 Lakhs to avoid Kumar.

Instead, he made these allegations:


KumarAjay offered me money to bash #AeDilHaiMushkil as he is offering in the tape also but I refused. I told them that I will do it free.

Ppl thinking that I called Kumar Mangat but not true. Actually he is close friend n he only called me n he called me many times before also.

Ajay Devgn, 47, is understandably prickly about box clashes, having accused Yash Raj Films of keeping his film out of cinemas when his Son Of Sardaar clashed with Jab Tak Hai Jaan in 2012. However, he appears to us to be crediting KRK with a degree of legitimacy and agency outsize of any actual influence as a reviewer he might possess. In this, we and KRK, who tweeted thanking Ajay for making him into a brand, are both agreed.
Karan Johar has wisely refused to respond.
Shivaay also stars Polish actress Erika Kaar and Saira Banu's grandniece Sayyeshaa Saigal. Karan Johar's Ae Dil Hai Mushkil features an ensemble cast of Ranbir Kapoor, Aishwarya Rai Bachchan and Anushka Sharma.