Ajay Devgn, who is currently filming Golmaal Again, took off time from his busy schedule to spend time with his son Yug 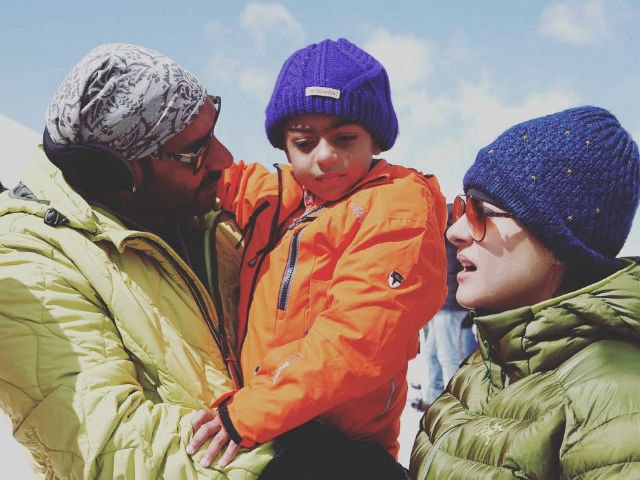 Actor Ajay Devgn, who is currently filming Rohit Shetty's Golmaal Again, took off time from his busy schedule to spend time with his son Yug. Ajay shared the candid picture with Yug on Instagram, probably photographed on the sets of Golmaal Again. Recently, on his 48th birthday, the actor had shared a picture of his daughter Nysa, 13, and Yug, 6. The posts come as a delight to all his fans, as Ajay is quite reserved about his personal life. Golmaal Again is the fourth instalment of Rohit Shetty's blockbuster comedy series Golmaal: Fun Unlimited. The film had released in 2006. Last month, actors Ranveer Singh and Sanjay Dutt had visited the sets of the film.
Here's Ajay Devgn's post.

Check out Ajay's picture with his 'best birthday gifts.'

Ajay's castmates in Golmaal Again are Arshad Warsi, Tusshar Kapoor, Shreyas Talpade and Kunal Kemmu. They have been joined by actresses Tabu and Parineeti Chopra. The shooting of the film began earlier in March and the first schedule of the film is complete. Tabu and Ajay have co-starred in films like Vijaypath and Drishyam. Golmaal Again is scheduled for a Diwali release.
In a career spanning for more than 25 years, Ajay has appeared in more than over 100 films. He debuted in 1991 with Phool Aur Kaante. Ajay is best known for his performances in Zakhm, Hum Dil De Chuke Sanam, Company, Gangajal, Omkara, Rajneeti and Singham franchise.
Ajay Devgn married Kajol in February 1999 after a courtship of five years. In 2008, he directed U Me Aur Hum, a film in which he co-starred with wife Kajol.