Kajol, who happens to be half-Marathi, attempted to teach Ajay how to pronounce the name of the Marathi show that the two would be on soon. He had had enough 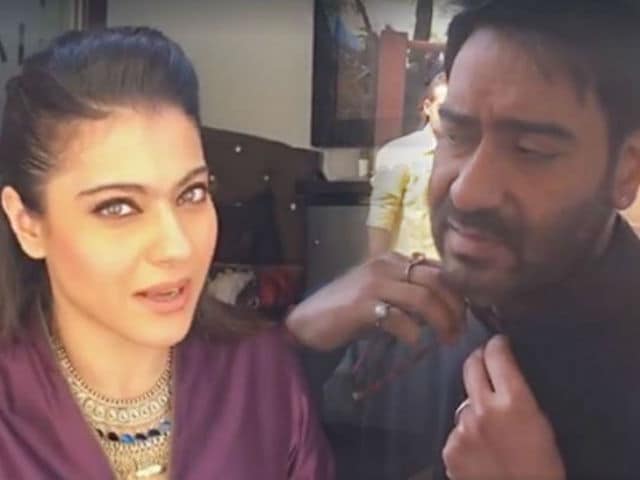 This image was posted on Twitter by Ganesh Desingh

Trust Bollywood's enduring pair Ajay Devgn and Kajol to always keep us entertained with their cutesy exchanges. The actress, who has just recently started mastering the art of Facebook, posted a video of her attempt to teach husband Ajay a bit of Marathi for a promotional shoot, and his response was categorically hilarious.
Kajol, who happens to be half-Marathi, attempted to teach Ajay how to pronounce the name of the Marathi show that the two would be on soon - Chala Hawa Yeu Dya. After repeating herself twice, and Ajay trailing off after one try, he had had enough. "Aata Majhi Satakli," he said and the two walked off in cackles of laughter.
Note that the line is one of Ajay's most famous dialogues from his blockbuster film Singham.
Ajay is gearing up for the release of his pet project Shivaay and Kajol is by his side in full swing. Shivaay is this year's Diwali release and will clash with Karan Johar's Ae Dil Hai Mushkil. The film also stars Erika Kaar and Sayyeshaa Saigal.
Meanwhile, watch Kajol and Ajay's interaction here: