"Actually, I was a lot more intimidated by Kajol than Ajay. With Ajay I was like 'Hello man!' With Kajol it was like 'Hello ma'am.' I was trying to be very respectful. I did not talk much with her," Erika told PTI in an interview. 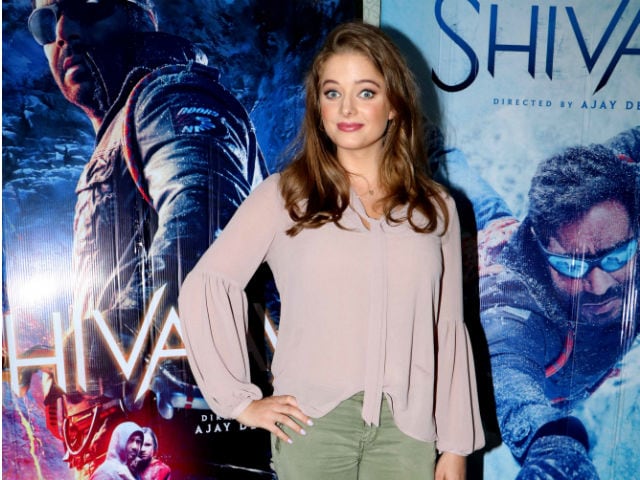 She may be making her Bollywood debut opposite Ajay Devgn in Shivaay but Polish actress Erika Kaar was more intimidated and star-struck by his wife, Kajol.
Erika says she was apprehensive to talk to Kajol because the Bollywood actress has a huge fan following in Poland.
"Actually, I was a lot more intimidated by Kajol than Ajay. With Ajay I was like 'Hello man!' With Kajol it was like 'Hello ma'am.' I was trying to be very respectful. I did not talk much with her," Erika told PTI in an interview.
"We know Kajol because she is huge worldwide. In Poland, when you hear Kajol, people start screaming. They are such huge fans. We also knew Kabhi Khushi Kabhie Gham. It is huge there."
According to Erika, her friends even have night outs where they dance to the popular track Bole Chudiyan from the Karan Johar directed romantic-drama.
"When we have ladies night, my friends are such huge fans that they watch Bole Chudiyan and dance. They don't know the lyrics, nothing, but they love it. So when they learnt that the person I'll be working with is Kajol's husband, they forced me to show him the video of how they are dancing. They love her. But I did not show the video to him. I am not crazy,"she added.
When asked if she showed the video to Kajol, Erika quipped, "I was scared to tell her. I did not," she said.
Shivaay is an upcoming action thriller, produced and directed by Devgan.
Erika says she met Kajol while shooting for the film but they did not interact much.
"We met in Bulgaria and then in Mussoorie. But since I knew Ajay was working so hard on the project, once his family came, we all tried to give them their quality time."
The film is Ajay's second directorial venture after the 2008 romantic-drama U Me Aur Hum.
Erika, who has worked in TV series like Blondynka and Az po suffit!, says she avoided watching any Bollywood film before her movie as she did not want to follow a certain pattern.
Shivaay, which also stars Sayesha Saigal will hit the screens on October 28.
(This story has not been edited by NDTV staff and is auto-generated from a syndicated feed.)