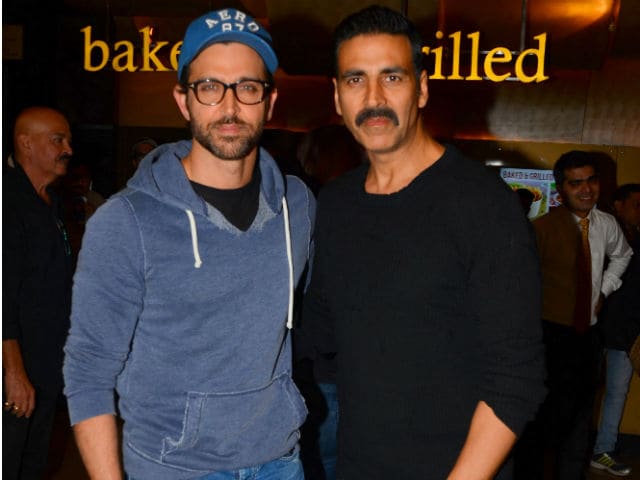 Neighbours, friends, colleagues and now co-stars? Hrithik Roshan and Akshay Kumar are reportedly likely to come together for a movie, reports DNA. The actors share a great bond and are often spotted spending quality time together along with friends and family. Last year, Akshay Kumar's film Rustom had clashed with Hrithik's Mohenjo Daro at the box office. The actors exchanged tweets wishing each other luck for their respective films. Their films had hit the theatres on August 12, 2016. Rustom, which was based on the real life Nanavati case, fared well at the box office, while Ashutosh Gowariker's Mohenjo Daro miserably failed to impress the audience.

A source told DNA that the actors will now be collaborating for a two-hero project. "They have found a great script which is perfect and they both have lead roles," said a source.
Akshay Kumar last release was Jolly LLB 2. The film, directed by Subhash Kapoor, is a sequel to the 2013 movie Jolly LLB.Huma Qureshi, Saurabh Shukla and Annu Kapoor also feature in lead roles. The 49-year-old actor will next be seen in Neeraj Pandey's film Naam Shabana, co-starring Taapsee Pannu. He will also feature in Toilet - Ek Prem Katha, directed by Shree Narayan Singh. Bhumi Pednekar and Anupam Kher will play key roles in the film. The Housefull actor is also working with Sonam Kapoor and Radhika Apte in Padman, a biopic on social entrepreneur Arunachalam Muruganantham. The film will be produced by his wife Twinkle Khanna under her new banner Mrs Funnybones Movies.
Meanwhile, Hrithik Roshan, who was last seen in Kaabil, will soon begin shooting for Rakesh Roshan's Krrish 4.