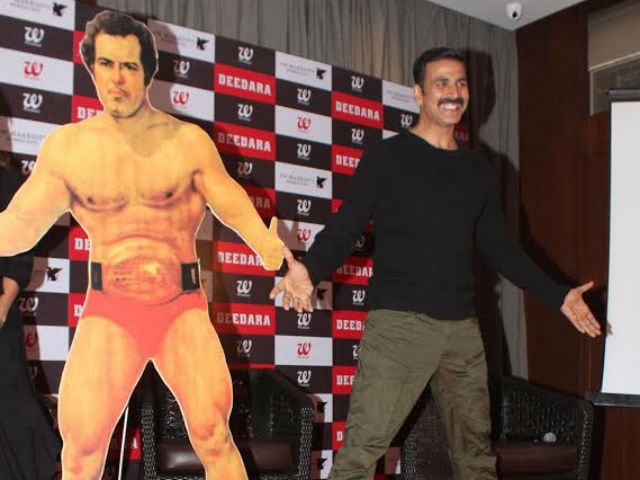 There is no denying the fact that Akshay Kumar is one of Bollywood's finest and fittest actors. The 49-year-old actor who recently launched the biography of renowned wrestler-turned-actor Dara Singh at the latter's 88th birthday said that he wish to play the role of Dara Singh onscreen. The book titled Deedara aka Dara Singh, is based on Dara Singh's life and is written by Seema Sonik Alimchand. Dara Singh has acted in many films the latest one being Kareena Kapoor and Shahid Kapoor's Jab We Met. He died in 2012. His son Vindu Dara Singh is also an actor and has worked with Akshay Kumar in few films as a supporting cast.
Speaking about the challenges the role would demand, Akshay told news agency IANS, "I need at least two years to put on that kind of bulk and look like a wrestler to portray his role as Dara Singh was a huge man and I have to justify his appearance."
Akshay, whose father was also a wrestler talked about how he got tickets to a show where Dara Singh had come for inauguration. "Once, Dara Singh saab came for an inauguration. Somehow, I managed to get three tickets and I went there with my sister and father, who was also a wrestler," said Akshay to IANS.
Dara Singh's first film as a lead actor was King Kong and is best remembered for the portrayal of his role as Hanuman in the Ramayana series.
Vindu also thanked Akshay for being a part of the launch.


Thank you @akshaykumar for the wonderful #DeeDara book launch pic.twitter.com/q3BPn7UQ4E

Akshay's next release will be Jolly LLB 2, which is slated to release on February 10. He is currently shooting for Toilet: Ek Prem Katha and will be also be seen in 2.0 with Rajinikanth and Amy Jackson.
(With inputs from IANS)