"Fortunate that I got opportunity to come and meet you. I have always said I'm 'reel hero', you are real hero," Akshay Kumar said 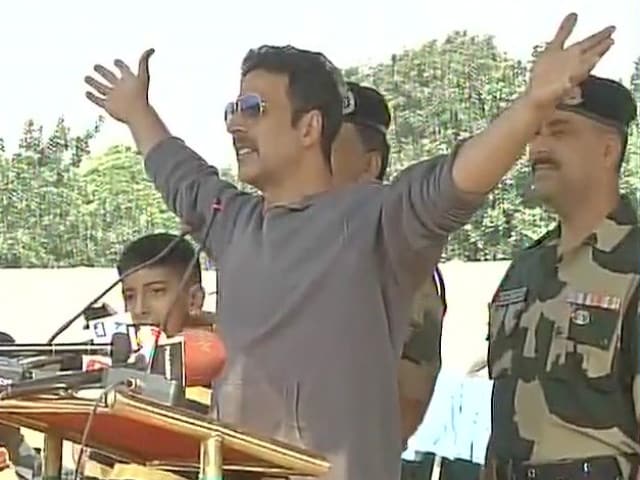 Actor Akshay Kumar, known for playing patriotic characters in films like Rustom, Baby, Holiday and Airlift, paid a visit to the Border Security Force base camp in Jammu and Kashmir on Tuesday morning.
Akshay paid tribute to those who died in ceasefire violations by Pakistan along the Line of Control. News agency PTI reported firing by Pakistani troops along the Line of Control on Tuesday morning. There have reportedly been over 100 ceasefire violations after the surgical strike.
Addressing the jawans in a press conference, Akshay said that the Indian Army are the "real heroes" while he is simply a "reel hero."


Fortunate that I got opportunity to come and meet you. I have always said I'm 'reel hero',you are 'real hero': Akshay Kumar at BSF base camp pic.twitter.com/CoPLNdZLXJ

J&K: Akshay Kumar at BSF Base camp in Jammu, pays tribute to soldiers who lost their lives in ceasefire violations and encounter pic.twitter.com/NCmR1RzuER

#WATCH: Akshay Kumar pays tribute to soldiers (who lost their lives in ceasefire violations/encounter) at BSF base camp in Jammu pic.twitter.com/IxGoxCFHrD

Akshay also spoke about India and Pakistan, calling for peace:


Peace is imp as many lives are lost; I think peace is only way out: Akshay Kumar when asked if peace needs to be restored btw India-Pak pic.twitter.com/mIrEdCsHAB

There are so many ppl in our country who want to help our armed forces, why not make an app for it?- Akshay Kumar at BSF base camp in Jammu pic.twitter.com/gykWuPgcYZ

Earlier in September, Akshay Kumar wrote "enough is enough" in a strongly-worded tweet following a terror attack on an army base in Jammu and Kashmir's Uri which killed 17 soldiers:

Other Bollywood stars like Amitabh Bachchan, Shah Rukh Khan and Ajay Devgn also expressed their anger and disappointment on Twitter:

Saddened to hear of the cowardly attack in Uri. Prayers for the families of our martyred soldiers. & may the terrorists b punished soon!

Akshay Kumar's portrayal of patriotic roles - a Defence Intelligence agent in Holiday, a decorated Naval Officer in Rustom and a secret agent and spy in Baby - have been critically acclaimed by critics and audience alike.
Akshay Kumar, 49, has finished shooting courtroom drama Jolly LLB 2 and is busy with thriller 2.0, co-starring Rajinikanth. Akshay's upcoming films also include Naam Shabana and Gold. Akshay, who was last seen in Rustom, made special appearances in Dishoom and Akira.