The new poster shared by Akshay Kumar features an open mustard field and comes with a 'warning.' The tagline of the poster reads: "Nature is not a toilet" 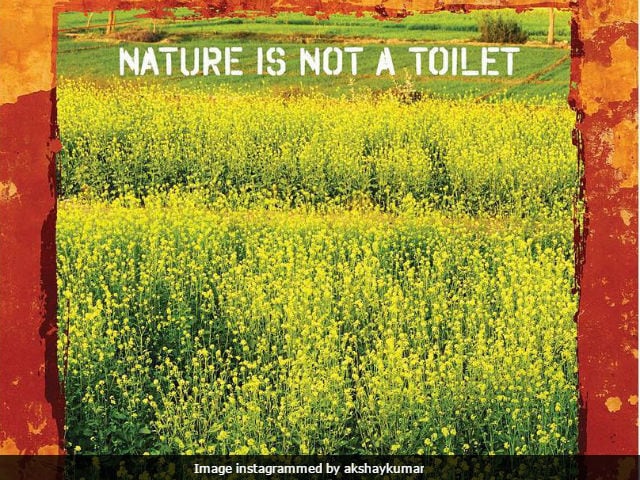 Actor Akshay Kumar shared a new poster of his upcoming film Toilet: Ek Prem Katha on social media. The new poster shared by the 49-year-old actor features a mustard field and comes with a 'warning.' The tagline of the poster reads: "Nature is not a toilet." The trailer of Toilet: Ek Prem Katha will be unveiled on June 11 and Akshay Kumar has been sharing several pictures and videos on social media to countdown its release. On Tuesday, the Bhagam Bhag actor shared a poster which featured various toilet signs from all across the country. See the posters shared by Akshay Kumar here:

Watch the hilarious video posted by Akshay Kumar on Monday.

Toilet: Ek Prem Katha has been directed by Shree Narayan Singh and co-produced by Akshay Kumar and Neeraj Pandey. The film deals with the need of sanitization in India and is based on Prime Minister Narendra Modi's Swachh Bharat initiative. Anupam Kher and Sana Khan also feature in supporting roles in the film.
Last month, Akshay Kumar met Prime Minister Narendra Modi to brief him about his upcoming film. He also met Railway Minister Suresh Prabhu, who praised him for his efforts to spread awareness about Swacch Bharat Abhiyan through his film.
Akshay Kumar recently received the National Award for Best Actor for his performance in 2016 movie Rustom. The film was based on the real life incident of Naval Officer K M Nanavati and businessman Prem Ahuja.
Akshay Kumar was last seen in Shivam Nair's Naam Shabana, co-starring Taapsee Pannu.
After Toilet: Ek Prem Katha, he will feature in 2.0 along with superstar Rajinikanth.
Akshay Kumar is currently shooting for Padman,directed by R Balki. The film also stars Sonam Kapoor.