Akshay Kumar tweeted: "Met Prime Minister Narendra Modi and got the opportunity to tell him about my upcoming 'Toilet-Ek Prem Katha.' His smile at just the title made my day" 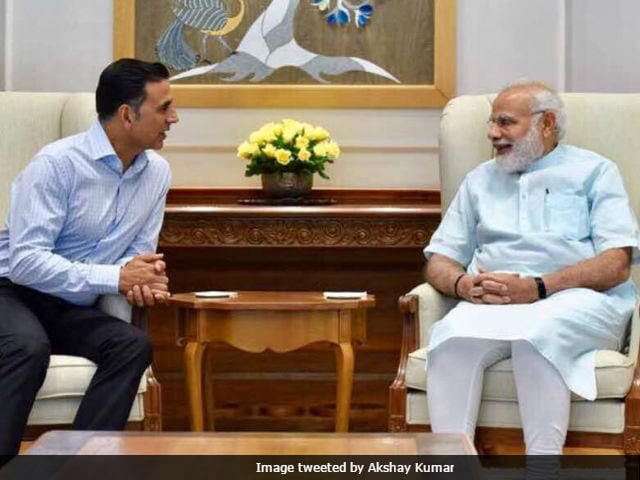 Prime Minister Narendra Modi knows all about Akshay Kumar's new film Toilet: Ek Prem Katha. The 49-year-old actor revealed in a tweet today that he told PM Modi about his film at a meeting in New Delhi and that PM Modi's 'smile at just the title made (Akshay's) day.' Toilet: Ek Prem Katha deals with the need for sanitation in India - a theme that identifies closely with PM Modi's Swachh Bharat campaign. The film, however, was conceptualised before Narendra Modi became Prime Minister, the writers of Toilet: Ek Prem Katha told news agency IANS. Here's Akshay's tweet, posted with a photo of him meeting PM Modi:


Met PM @narendramodi and got the opportunity to tell him about my upcoming 'Toilet-Ek Prem Katha.' His smile at just the title made my day! pic.twitter.com/qbvYrlbM2Y

Akshay Kumar was likely meeting the Prime Minister with regard to his website and app that allows citizens to make donations towards military personnel.
Akshay Kumar took Toilet: Ek Prem Katha from reel to real in March, helping to dig pits for sanitation in Madhya Pradesh:

During a Swachh Bharat campaign by NDTV, Akshay Kumar revealed he wants to address the issue of the lack of toilets in rural India through the movie: "This issue is there in the face so I am talking about it through the film ('Toilet: Ek Prem Katha') and why should we run away from it. It is one of biggest problems we have. There are about 1000 children that die due to diarrhoea in India," said Akshay.
"When I announced the name, many people called me to ask why I am using this title. I got a good script. So, I said that I want to make this film. It is a taboo thing to talk about," Akshay said. He's also tackling sanitary napkins in his new project, titled Padman.
Toilet: Ek Prem Katha co-stars Dum Laga Ke Haisha actress Bhumi Pednekar, Anupam Kher and Sana Khan. The film releases in August, Akshay revealed in an earlier tweet:


Pleased to share, @ToiletTheFilm an unusual love story will be with you on 11th Aug, 2017. Tayyar ho jayye Swachch Azaadi ke liye! pic.twitter.com/EEb5bOySu0

Akshay Kumar recently won the National Award for Best Actor for his performance as a naval officer accused of murder in Rustom. He was seen in the films Jolly LLB 2 and Naam Shabana this year. After Toilet: Ek Prem Katha, Akshay will have a big release in 2.0, starring Rajinikanth.