On Twitter, Akshay Kumar shared a picture of himself with Bhumi Pednekar and wrote: "With the wrap of @ToiletTheFilm treating you guys to a still from the film" 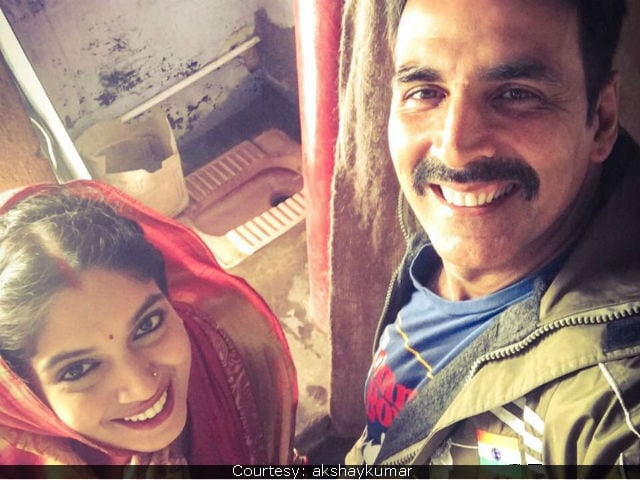 Actors Akshay Kumar and Bhumi Pednekar have wrapped up the shoot schedule of their upcoming film Toilet: Ek Prem Katha. On Twitter, Akshay shared a picture of himself with Bhumi from the shoot and wrote: "With the wrap of @ToiletTheFilm treating you guys to a still from the film...Keshav and Jaya's unique love story coming to you on June 2." Toilet: Ek Prem Katha is a comedy directed by Neeraj Pandey. Akshay, 49, and Neeraj have collaborated for the third time for this film. Neeraj Pandey earlier directed Akshay Kumar in the films Special 26 and Baby. Neeraj also produced Akshay's 2016 hit film Rustom.
Here's Akshay's tweet on Toilet: Ek Prem Katha:


With the wrap of @ToiletTheFilm treating you guys to a still from the film...Keshav and Jaya's unique love story coming to you on June 2 :) pic.twitter.com/pBkLgAUH4d

It will be for the first time that Akshay Kumar will be sharing screen space with Dum Laga Ke Haisha star Bhumi Pednekar, 27. The film is a love story between Akshay and Bhumi Pednekar's characters. From the pictures shared by both these stars on social media, we assume that Akshay and Bhumi play a married couple named Keshav and Jaya.
Toilet: Ek Prem Katha releases on June 2 and is produced by Aruna Bhatia and Plan C Studios in association with Abundantia. It is presented by Viacom18 Motion Pictures and KriArj Entertainment.
Meanwhile, Akshay Kumar's first film of 2017, Jolly LLB 2 released on February 10. The film is a satire on Indian legal system and has so far collected over Rs 97 crore at the box office. Apart from Jolly LLB 2 and Toilet- Ek Prem Katha, Akshay will be seen in Rajinikanth's 2.0. Bhumi Pednekar, who debuted in 2015 with Dum Laga Ke Haisha opposite Ayushmann Khurrana, will be collaborating with the actor again for Shubh Mangal Saavdhan.