Akshay Wanted Twinkle to Tone Down the Humour After This Incident 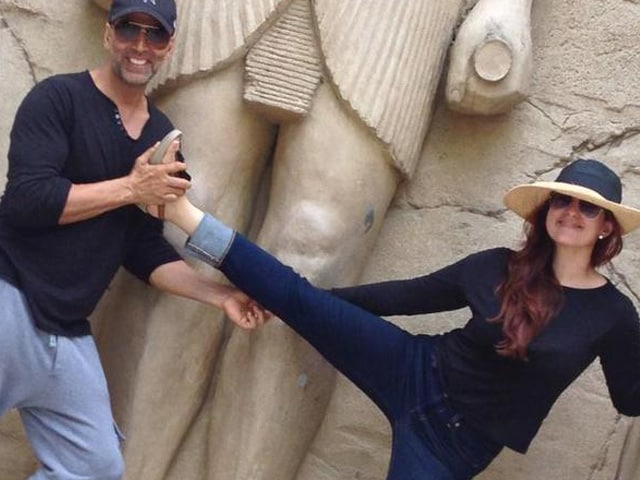 This image was posted on Twitter by Twinkle Khanna

Akshay who is now gearing up for Singh is Bliing often plays copy editor to wife Twinkle Khanna aka Mrs Funny Bones' articles said, "My wife has the wackiest sense of humour and tends to go overboard

25 years in the industry and the sheen has not worn off from the man who still has the Midas touch. Yes Akshay Kumar, the Singh with the Bling remembers his 1990 movie Saugandh.
Whilst his co-star Sidharth from Brothers admits sheepishly, "I was just five then," adding that Akshay Kumar was an inspiration. He stated that the best promotional tour was with Khiladi Kumar who travelled in style. Also with a wink he said, "I'm looking for another film to do with him."
Looking upbeat, one has to admit Brothers seems to be one of Bollywood's fittest films, with the fittest people - Akshay, Sidharth and Jacqueline - sharing screen space.
Teasing their heroine both Akshay and Sidharth said it was Jackie who had a field day surrounded by men in shorts, sweaty chests and punching each other. Their leading lady didn't beg to differ at all, hoping that the next outing with the boys would be called Sisters.
Sidharth Malhotra who has often been called the 'thinking actor' said that he didn't want to get identified with one particular genre and wanted to do all sorts of roles as he was willing to up his game.
Akshay who is now gearing up for Singh is Bliing often plays copy editor to wife Twinkle Khanna aka Mrs Funny Bones' articles said, "My wife has the wackiest sense of humour and tends to go overboard. I have to ask her to tone it down recounting an incident we had just after being married when I took her for a film. The producer asked her, 'Bhabhiji kaisi thi film?, and her response was 'It's shit'.
Akshay said, "The producer was stunned and never worked with me again. I didn't know how to react and was like, 'Tina why did you have to?' To which she said, "Well it was crap so I said it."
"That's how she is. So I need to control her," he grinned.
Well may be she can script one of your comedies Akshay?
"That would be fine," he said.