Alia Bhatt at Filmfare Awards: Kareena Kapoor was not present in the audience to cheer for Alia, who performed to Yeh Ishq Haye from the 36-year-old actress' much-loved film Jab We Met 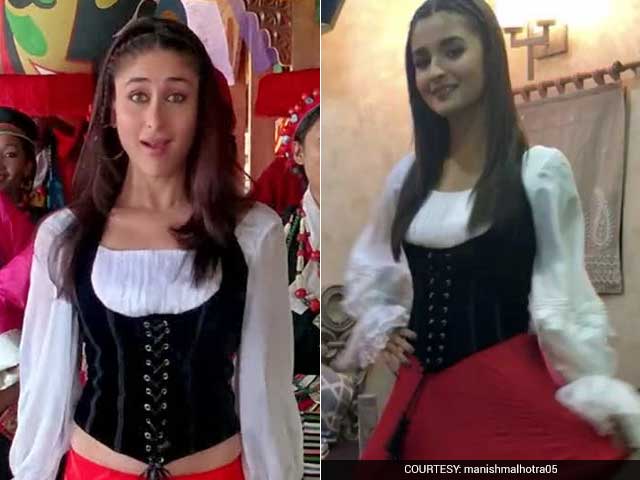 Actress Alia Bhatt paid tribute to her industry senior and colleague Kareena Kapoor Khan at the 62nd Filmfare Awards in the cutest manner possible. Alia and Kareena co-starred in Abhishek Chaubey's drug drama Udta Punjab, which fetched the 23-year-old actress the Best Actress Award. Alia featured as an abused and unnamed Bihari migrant in the film, which also brought in an award for Shahid Kapoor - he won Critics Award For Best Actor while Diljit Dosanjh received the Best Actor Debut Award. The Filmfare Awards was co-hosted by Shah Rukh Khan and Karan Johar in Mumbai on January 14 and witnessed blockbuster performances by Varun Dhawan, Sonakshi Sinha, Tiger Shroff and of course Alia.
Kareena was not present in the audience to cheer for Alia, who performed to Yeh Ishq Haye from the 36-year-old actress' much-loved film Jab We Met. Alia's look was exactly modelled on one of Kareena's from the song. Alia looked cute as a button in a red skirt paired with white shirt and a black corset-like jacket.
Designer Manish Malhotra, who shared the video of Alia twirling, also wrote: "Alia Bhatt performing a tribute to iconic actress Kareena Kapoor."

This is not the first time Alia dressed up like another actress. Ahead of the release of Akshay Kumar's Rustom in August last year, Alia stopped social media traffic as she reprised Akshay and Raveena Tandon's hit song Tip Tip Barsa from 1994 film Mohra.

Well, this is how Alia was spotted the morning after her big Filmfare win:

Alia turned heads at the Filmfare red carpet in a pale pink gown from the shelves of Prabal Gurung:


And all thanks to my favourite @prabalgurung !!!! Wearing Atelier Prabal Gurung. Your dress made the night even more special! Love you.

Meanwhile, Kareena Kapoor and Saif Ali Khan welcomed a son they've named Taimur Ali Khan Pataudi on December 20. The actress worked through her pregnancy for upcoming film Veere Di Wedding and appeared in the last episode of Koffee With Karan 5 with Sonam, who also co-stars in the wedding drama. Kareena is currently on maternity leave and is often spotted hanging out with close friends and family members.
Alia Bhatt was last seen in Shah Rukh's Dear Zindagi and is currently filming Badrinath Ki Dulhaniya, co-starring Varun.