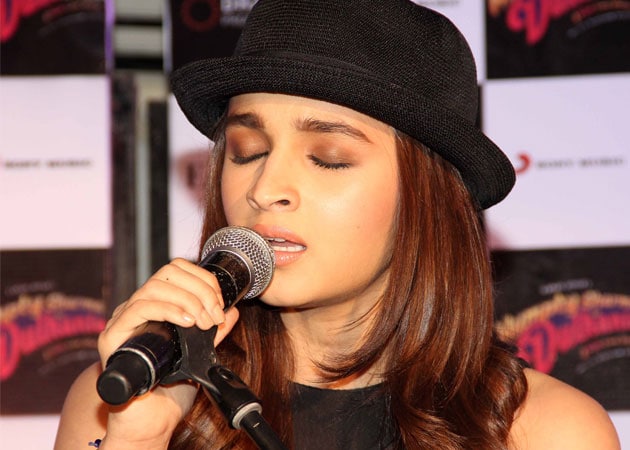 Alia Bhatt will be seen in Humpty Sharma Ki Dulhania opposite Varun Dhawan.

After her singing debut in Highway, Bollywood actress Alia Bhatt recently launched Samjhawan Unplugged from her upcoming film Humpty Sharma Ki Dulhaniya. When the actress was asked if she was a better singer than Shraddha Kapoor, who recently lent her voice for Ek Villain, Alia said technically she sang her first song before Shraddha, but added that there shouldn't be any comparisons between them.
The actress said, "I don't know who is a better singer but I sang before Shraddha technically in Highway. So I have already done that and I am doing it again right now with Samjhawan for Humpty Sharma Ki Dulhania. But we shouldn't be compared. I mean you don't compare music, you don't compare films."(Also read: Alia Bhatt to Sing Samjhawan Unplugged Live )
Her co-star Varun Dhawan interjected, "Arey, Shraddha's version was outstanding. She did a great job in Galliyan. Totally unexpected! But having said that Alia's version is altogether different. See, Samjhawan comes with a lot of history. Rahat saab had sung it in Pakistan and there's never been a female version. So, it's a very deep song basically and you have this 21-year-old girl who has lent her voice to it now. It's a very jazzed up version of the song and I think even the instrumentation is brilliant."
"It's very different from Galliyan. So, I think both are from different gharanas of music," he added. Alia seemed to agree with him and vouched that Shraddha did a brilliant job in Galliyan. (Also read: Alia Persuaded Me to Sing: Varun Dhawan )
Alia earlier had lent her voice to the song Sooha Saha from her movie Highway but she had a very small part. This time, the actress even sang antara and mukhda in Samjhawan and she agreed that it wasn't an easy task at all.
Well, we always knew Alia knows how to hit the high note.
Watch: