Alia Bhatt Has An Advice For All You Fitness Enthusiasts 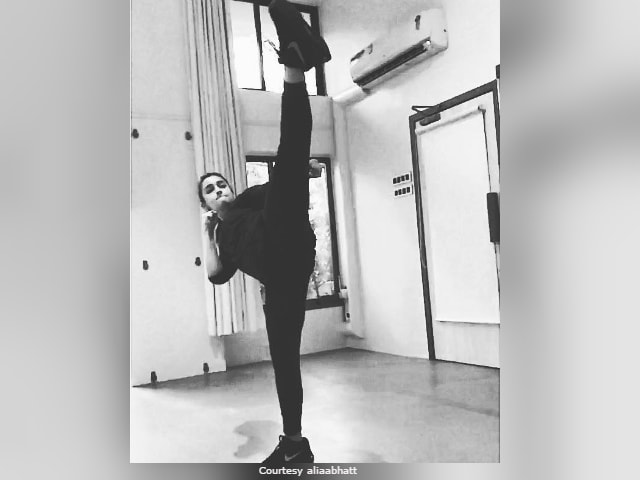 Like most Bollywood stars, Alia Bhatt too is a fitness freak. For her daily regime, Alia trains with fitness guru Rakesh Yadav and keeps her fans and followers updated with her progress. On Tuesday, she Instagrammed a new photograph from her work-out session with a rather hilarious caption. She also has an advice for all you fitness enthusiasts. "Aim for the sky? (also aim to not make a funny face while you're doing so)," Alia captioned her picture. Alia is not always living up to her own expectations on the fitness mat but who cares as long as you can come up with catchy captions. "I'm obviously trying to get somewhere with this move. Not quite sure where. So let's call this PART 1," she wrote for a video in which she can be doing a backbend kick-over. Alia Bhatt is also a regular at Yasmin Karachiwala's fitness classes.
Here's Alia Bhatt 'trying not to make a funny face:'


Aim for the sky? (also aim to not make a funny face while you're doing so ) @rakeshyadav13 #tuesdaymotivation #fitnessisajourney


I'm obviously trying to get somewhere with this move. Not quite sure where. So let's call this PART 1 :) @rakeshyadav13 ( kids don't try this at home ) #fitnessisajourney #backbendbridge #walkover


Mission handstand- Level 2! They say practice makes a man perfect.. I say PROGRESS makes a man HAPPY ! Here's to not being perfect.. but TRYING to be better :) @rakeshyadav13


She believed she could, so she did! #keeplearning #sundayfunday @charvi.b

A browse through Alia Bhatt's Instagram profile is always a delightful experience. Her latest Instagram obsession is Edward Bhatt, her pet cat, who she says is "the love of her life." While at home, Alia and Edward are inseparable, there's proof on her social media accounts.
Alia has Ayan Mukerji's Dragon in the pipeline, in which she co-stars with Ranbir Kapoor. She will also share screen space with Vicky Kaushal in Meghna Gulzar's war drama. Alia will also feature with Ranveer Singh in Gully Boy, which will be directed by Zoya Akhtar.