Alia Bhatt's Dulhania is a Small-Town Girl With Strong Opinions 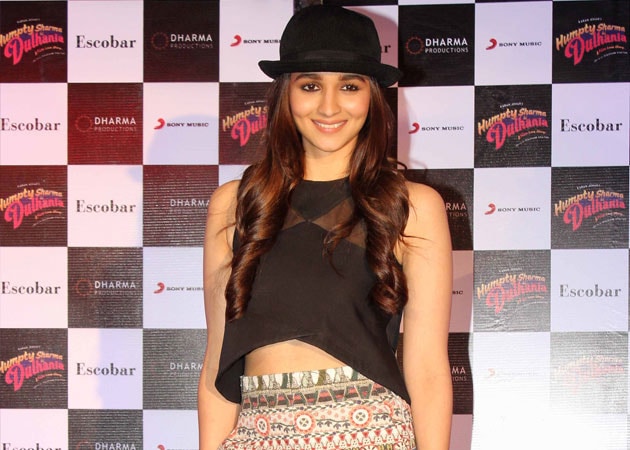 Ali Bhatt will next be seen in Humpty Sharma ki Dulhania

Alia also said she wants to explore her singing side further. "I want to explore it. I have been advised by A R Rahman to take my singing seriously and I am thinking about it."

After proving herself as an actor in Highway, Alia Bhatt wants her future film choices to be equally brave and varied.
Alia, who is the daughter of Mahesh Bhatt, had a tailor-made entry into Bollywood with Karan Johar's hit Student of the Year.
The 21-year-old actress, however, impressed critics in her subsequent movies like Highway and Two States.
In her fourth film, Humpty Sharma ki Dulhania, Alia plays a gusty heroine, who is a modern woman.
"Kavya (her character) is very lively and fiery. She wears her heart on her sleeves. Coming from a small town, her values are dear to her but she also portrays a modern woman with strong opinions. That's why she is the one carrying the hero in the film's posters," Alia told PTI in an interview.
The actress admits that the pressure to do well has increased, now that she has three films behind her, but that would not influence her film choices.
"The pressure is always there. But I know that I want to do good films. I want to stand out with all my characters and I want to give the audience as much variety as possible," she said.
She has teamed up with her Student of the Year co-star Varun Dhawan for the second time for Humpty Sharma ki Dulhania.
Alia says their chemistry is better this time as they have become more comfortable with camera.
"The chemistry is good because of the characters we are playing. Also, I think we were not as nervous and as confused about what we were supposed to do in front of the camera. It became very organic," she said.
After lending her voice to Sooha Saha in Imtiaz Ali's Highway, Alia took to mic again to sing Rahet Fateh Ali-rendered Samjhawan in an unplugged version.
The self-confessed bathroom singer was not scared to take on the popular number.
"I was not scared because I am not a professional singer. I was aware that if I mess up, I will not get as much flak. I love singing. It gives me a certain sense of peace. I am not singing to impress anybody and I am very proud as well as happy to get an opportunity to sing this song," she said.
Alia also said she wants to explore her singing side further. "I want to explore it. I have been advised by A R Rahman to take my singing seriously and I am thinking about it."
The film has been directed by debutant Shashank Khaitan and produced by Karan Johar's Dharma Productions.
Humpty Sharma Ki Dulhania, slated to release this Friday, also marks the film debut of TV actor Siddharth Shukla of Balika Vadhu fame.