All the gossip from the grand Bachchan Diwali party 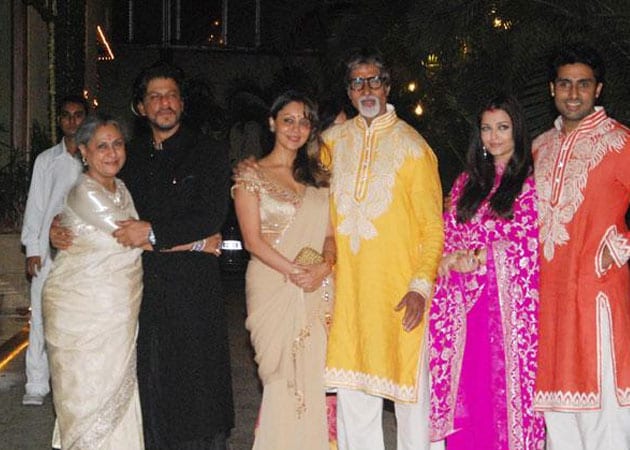 Amitabh Bachchan and his family threw a lavish Diwali bash

Like every year, Amitabh Bachchan and his family threw a lavish Diwali bash on Sunday with the who's who of the industry in attendance.

Like every year, Amitabh Bachchan and his family threw a lavish Diwali bash on Sunday with the who's who of the industry in attendance.
The house was decorated with marigold and jasmine flowers and the garden was lit with colourful lights for the occasion.
Ranbir Kapoor and Katrina Kaif arrived late night in Ranbir's car and left the party at around 5.30 am together. Kat's car was spotted tailing Ranbir's car even as she travelled in his car. Big B himself came to drop Ranbir and Katrina to their car.
Shah Rukh and Gauri Khan arrived at the party at around 2.30 am and were there till 7am. Bachchan and family also stepped out and posed for pictures with Shah Rukh and Gauri.
Other guests who attended the bash were Nikhil Advani, Rishi Kapoor, Jimmy Shergill, Alia Bhatt, Asin, Javed Akhtar and Shabana Azmi, Neha Dhupia, Anurag Kashyap (who seems to have surfaced on the social scene after quite a while), Sikander Kher with his new short haircut, Anushka Sharma, director Farah Khan accompanied by Sonu Sood, Vidya Balan with Siddharth Roy Kapur, Rohit Roy and Manasi, Kirron Kher and Ritesh Sidhwani. Though Sonam Kapoor had a party at home, she came for the Bachchan bash for a bit.
Aishwarya wore a dazzling pink suit while Jaya opted for a more sober sari. The men in the family were in a colourful mood as father Amitabh and son Abhishek wore similar kurtas in striking colours.
According to a source, "Every year on Diwali, the industry looks forward to the festive celebration at Jalsa. It is one day when the entire industry comes together.
Lovebirds Ranbir and Katrina were inseparable at the bash."
The party started at 10 pm and went on till the wee hours of morning. While the older guests apparently played cards, Abhishek's friends were busy playing video games. The menu was mostly Indian, with various vegetarian and non-vegetarian delicacies included.
"The dahi vadas and grilled fish were a hit," said a guest.