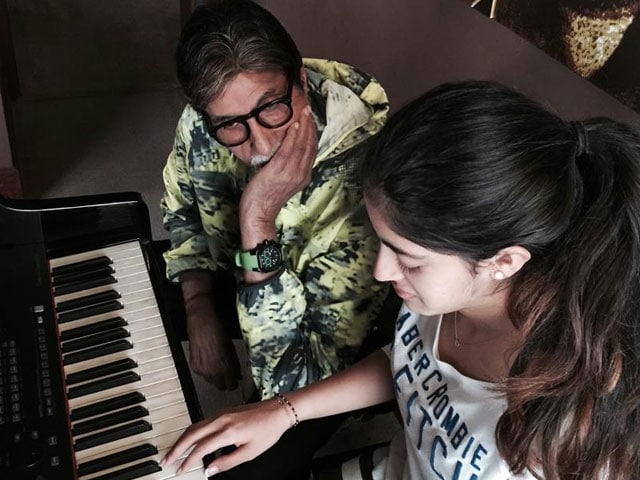 The 72-year-old actor, took to his official blog to share some photographs featuring Navya Naveli working her magic on the piano, which he also shared on Facebook

Megastar Amitabh Bachchan was pleasantly surprised by the "hidden talent" of his granddaughter Navya Naveli, who regaled him by playing some tunes on a piano.
The 72-year-old actor, who is married to actress Jaya and has daughter Shweta and son Abhishek, took to his official blog to share some photographs featuring Navya Naveli working her magic on the piano, which he also shared on Facebook.

"Look what took its place the entire day...the life to witness the gift of a granddaughter, of her accomplishments, of her talents. That is more than what many wish and possess," Big B posted on his official blog.
The actor, who has sung on and off screen, added, "And yes the inner joy of admiration for Navya as she surprises us all with her hidden talent. The music and the keys of the piano, untrained, unread, just performing with the mind and what has remained with her somewhere. Astonishing".
Navya Naveli is the daughter of Shweta Nanda, who is married to businessman Nikhil Nanda. She also has a son named Agastya.
The veteran actor went on to bring out a comparison between the piano keys and life.
"That piano is the little space in my small little room. A space that I occupy on occasion, spend time with keys black and white. Life is made of just these two they say, but there are so many other colours too. And they bring joy and a brightness in us as well," shared the Piku star.