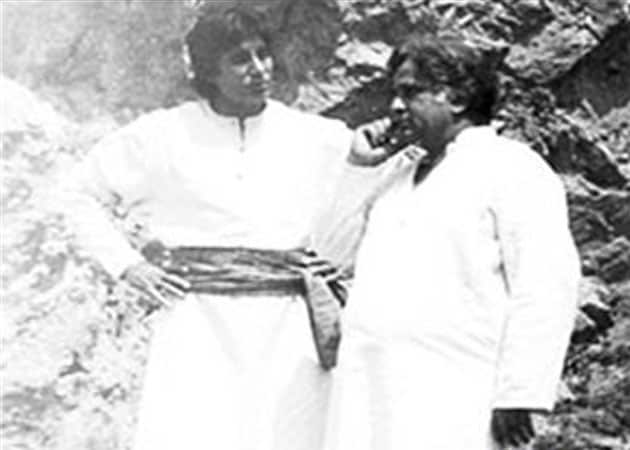 No stick! This photo of Big B and Shashi Kapoor shooting Ajooba in Ukraine was posted on Facebook by Amitabh Bachchan.

The reason we love reading Amitabh Bachchan's daily social network updates is because he has a gold mine of anecdotes from his long and illustrious career to share with fans.

The reason we love reading Amitabh Bachchan's daily social network updates is because he has a gold mine of anecdotes from his long and illustrious career to share with fans. The latest gem is a story about old friend and collaborator Shashi Kapoor who was directing Amitabh Bachchan in 1991 film Ajooba in the Russian town of Yalta, Ukraine.
Pics: Shashi-tabh in Ukraine
Big B posted a picture from the shoot with this story: "One confirmation that the picture is taken in Yalta, USSR then, now in Ukraine, is the missing stick in the hand of Shashi Kapoor ! In Mumbai when we started shooting he would move around with a stick on set, gathering his troops and bringing them to order, and generously using it if indiscipline occurred !! He lost the stick in Russia !! Thank God !!"
We fell over ourselves, laughing.
Big B also wrote: "Politically and historically known, because of the famous conference that took place between the Allies and USSR during World War II, but also climatically known to be a great health resort because of its climate, environment and the 'air about it' ... Especially for asthmatic patients. A location where the leaders went for rest and relaxation.
I took a flight to Simferopol, I think and then drove to Yalta, a couple of hours, past the 'Bear Mountain' - a huge chunk of mountain, which looks like a bear stooping down to drink water at a water body ... An amazing sight ! Did the Russian symbol of the 'bear' come from this ? I wonder !!"
Ajooba, a fantasy film, also starred Shashi Kapoor's brother Shammi and nephew Rishi. The female leads were played by Dimple Kapadia and Sonam.
Read: Amitabh Bachchan: Make films on real subjects
Amitabh Bachchan and Shashi Kapoor partnered each other in many hit films in the '70s and '80s, including Deewar, Kabhi Kabhie, Shaan and Namak Halaal. They have remained friends with Shashi Kapoor making a rare public appearance at Big B's 70th birthday party in October last year.