Abhishek Bachchan recently shared an adorable picture of him hugging his father on Instagram. 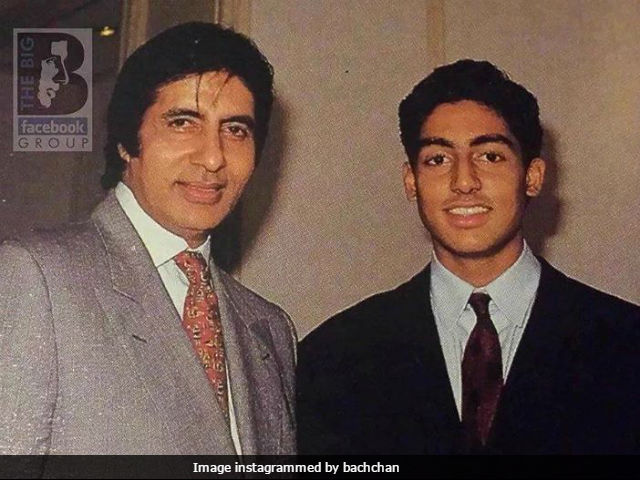 Abhishek Bachchan recently shared a heart-warming picture with his father, Amitabh Bachchan on Instagram. The 41-year-old actor captioned the pictured: "Never, never, never leave an opportunity to hug your parents.... Even if it takes them by surprise!." The Bachchans are a close-knit family and they have time and again shared adorable pictures on social media. On Abhishek's 41st birthday, Big B posted a nostalgic picture of the Bunty Aur Babli actor along with his sister Shweta Nanda. The 74-year-old actor's tweet read: "A Chelsea win .. a Pizza from Daughter's favorite .. a wishes at 12 .. and another year for Abhishek gone by ..#HappyBirthdayAB."
Take a look at some of the pictures shared by Abhishek Bachchan:


Never, never, never leave an opportunity to hug your parents.... Even if it takes them by surprise! #fathersandsons

No matter how big you become, to them, you'll always be their baby. #parents Photo courtesy - the big sis.

Abhishek Bachchan had made his Bollywood debut in the 2000 movie Refugee co-starring Kareena Kapoor. The actor was last seen in 2016 film Housefull 3, which was co-directed by Sajid-Farhad. The film also featured Akshay Kumar, Riteish Deshmukh, Jacqueline Fernandez, Nargis Fakhri, and Lisa Haydon in lead roles. The Happy New Year actor will next be seen in Hera Pheri 3. The film is a third installment of the Hera Pheri film series. The first two installments of the series featured Akshay Kumar, Sunil Shetty and Paresh Rawal in lead roles. The trio will be seen reprising their roles. The movie is being directed by Ahmed Khan and produced by Firoz A. Nadiadwala.
Meanwhile, Amitabh Bachchan, who was last seen in 2016 super hit film Pink, will next feature in Ram Gopal Varma's Sarkar 3.