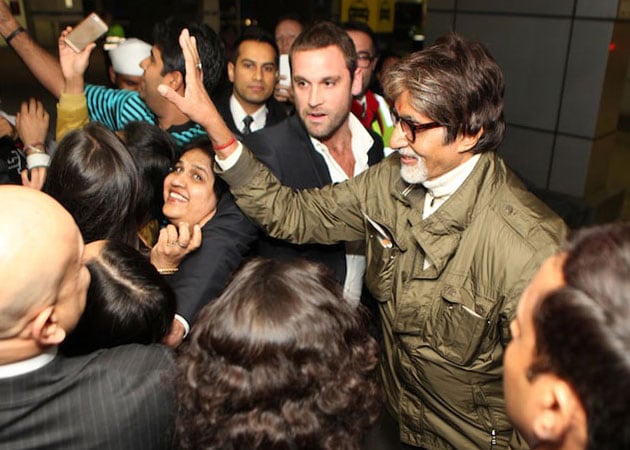 With Sholay 3D as its opening film, the Indian Film Festival of Melbourne (IFFM) was launched by Bollywood megastar Amitabh Bachchan

With Sholay 3D as its opening film, the Indian Film Festival of Melbourne (IFFM) was launched here today by Bollywood megastar Amitabh Bachchan in the presence of Victorian Minister for Tourism and Major events Louise Asher and the festival director Mitu Bhowmick Lange.(Also read: Amitabh Bachchan shoots cameo for Nagarjuna's Manam)
Announcing the launch of the 11-day long festival at a jam packed press briefing, Mr Bachchan said, "I am delighted that Melbourne is hosting this festival. I am very honoured." The 71-year-old actor thanked the Victorian government for conferring him with an International Screen Icon Award which would be formally given tomorrow at a gala event.
"Indeed I am honoured that they have decided to give me this award. I just feel that I am the least accomplished to receive such a recognition but this is your kindness, affection and grace," Mr Bachchan said.
He said cinema was a great medium, which transcended beyond colour, caste or religion. "We enjoy the same product, laugh at the same jokes and sing the same songs. We enjoy the same emotions," he said, adding that there were very few institutions left in the world that were able bring such integration.
"It is wonderful to see that Australian government has decided to use this medium in bringing the two cultures, communities together and building strong bonds of friendship. Not just in the field of commerce but in our culture, in our exchange of students and personalities," Mr Bachchan said.
Mr Bachchan also revealed that he was visiting Melbourne city for the first time but assured that it was surely not the last one.
Louise Asher also extended her thanks to the Bollywood icon for his visit as the guest of honour of the state. "We are honoured to have you as a guest of honour. He is the undisputed patriarch of Indian cinema. He was once described as one man industry and is adored, as you can see, by billions of fans worldwide," she said.
The star studded festival will be showcasing over 40 films, including two from Pakistan, till May 11.
The festival, said to be the southern hemisphere's greatest annual celebration of Indian cinema, has also incepted inaugural awards to honour films in five categories - Best Film, Best Performance, Best Director, Best Independent Film and the People's Choice Award.